Adrienne Lecouvreur was a talented actress who lived in Paris in the early 18th century and was part of the company at the Comédie Française. Her life is the subject is gossip and romantic stories and her death is a real-life 'true crime'. Poor Adrienne. She lived until only 38 years old. During that time she rose from humble beginnings, as the saying goes (she was the daughter of a hatter), through several affaires de cœur, which produced two daughters, to finally snare the heart of the handsome Maurice de Saxe, Count of Saxony and claimant to the Polish throne, a striking looking fellow and a brave and dashing soldier besides. Adrienne was frank about her earlier love life. She wrote to Maurice: 'Unfortunately I am not succumbing to love's charms for the first time in my life.'


She did know enough, though, not to succumb too quickly; but eventually Maurice triumphed in love as in battle. Unfortunately - or perhaps, inevitably - Maurice was also a womaniser. Nevertheless, Adrienne was a talented and famous actress of the day known for her moving delivery, and a beautiful woman besides. Although Maurice was away at the battlefield frequently, things may have gone along quite well, if not for the dastardly Other Woman.


Enter the young Duchesse de Bouillon, fourth wife of the elderly Duke, who also became enarmoured of the dashing Maurice - hardly surprising since her husband was forty years older than she, and Maurice so handsome. The rivalry of the two woman became the gossip of Paris. Then [*cue mysterious music*] Adrienne received a note asking her to meet a mysterious stranger in the Jardin de Luxembourg. Intruiged, Adrienne gathered some friends for support and went to the rendevous, where she was met by a hunchbacked priest (there would have to be a hunch-backed priest in the story) who claimed that the Duchesse had asked him to give Adrienne a magic philtre (don't you love that word?) containing a potion to stop her loving Maurice. But he suspected foul play (quick of him, eh?). Adrienne and her friends took the potion and fed it to a dog, which dropped dead immediately.


The gossip hit the court and the theatre world. The Duchesse protested her innocence and even turned up at one of Adrienne's performances, of Racine's Phèdre. Adrienne, prima donna that she was, seized the opportunity to declaim, right under the Duchesse's box, Phèdre's lines insiting that she is not 'one of these bold women/who can taste tranquillity in crime/and show an unblushing face to the world.'


Shock, horror, scandal. The crowd went wild, the Duchesse threatened to sue and the Comédie Française had to issue an apology. It didn't look too good for the Duchesse, however, when Adrienne collapsed, gravely ill, in the middle of a performance a few days later. She recovered, but died about a month later, in Maurice's loving arms, I am pleased to report.


Well! These stirring events are just the stuff of a good opera, I hear you say? You would be right. Francesco Cilea, an Italian composer from Southern Italy, working in the late 19th century, agreed too. Perhaps it was a little old fashioned when it was first performed in 1902. Perhaps the music doesn't quite rival his famous contemporary, Puccini. But at last night's performance at the Royal Opera House, Covent Garden, a sumptuous production and a truly star-studded cast turned Adrienne's sad story into a wonderful night-at-the-opera. Since the opera is in Italian, the correct title is 'Adriana Lecouvreur'. Before this season, the ROH had not performed it since 1906, and it has hardly been in the repertoire of opera houses around the world since the 1930s. On the strength of this new production, I predict a revival of interest.


The cast was world class. Adriana was sung divinely by the Romanian soprano Angela Gheorghiu. Since Ms Gheorghiu has rather a reputation for not turning up (and has disappointed London audiences in this run) our small party was very grateful to see her. (As one soul unkindly remarked, the performance was being filmed and recorded, so we had a pretty good chance that the diva would appear. I didn't say that. Not me.) The opera is known for some gorgeous arias for the soprano - one in particular is often performed in concert (lo son l'umile ancella') - and Ms Gheorghiu delivered them like the star she is. And those dresses! Oh, yes!


As to the divine Maurizio, the German tenor Jonas Kaufmann sang his heart out - and looked gorgeous besides. What can I say? Superlatives don't do it. Couldn't be better. And I've just read a post that says he was apparently unwell last night! They used last Tuesday's performance for the broadcast. All I can say is, I want to hear him when he's well!!


Then there was the Other Woman, in the opera named Princesse de Bouillon (which sounds a bit like a kind of soup). The performer was Olga Borodina, prima donna of the Kirov Opera, a gorgeous, big, beautifully nuanced mezzo voice which I felt privileged to hear. A real lady.


I need also to mention Alessandro Corbelli as Michonnet, Adriana's faithful theatre manager who suffers an unrequited love for her, sung very movingly. Bonaventura Bottone sang (and acted very comically) the role of the Abbe de Chazeuil (he's not a hunchback in this version). Then there's the sumptuous and clever set design, which opens backstage at the Comédie Française, moves from villa to palace, and backstage again. The costumes are to die for, too. Oh, plus there's a long ballet in the third Act which is not as boring as those things usually are. The conductor was Mark Elder and the director David McVicar (redeemed from that less than lovely 'Rigoletto' last month).


Some of the real life story's details have been changed in the opera. In particular, Adriana is fatally struck by poisoned violets, rather than a potion. The libretto is a bit confusing, made more so by some cuts that Cilea made (for example, he cut out a bit showing how the Princess could have got hold of the poison; and there's a bit of business with a bracelet that has some missing links). But as the ROH program notes have it:


For anyone of a literal turn of mind the story solely as expressed in the libretto has gaps, but Adriana Lecouvreur is not unique in the opera repertory in this regard.

Indeed.
During interval I overheard a neighbouring patron discussing the performance. She praised the singers but was disparaging about the opera. 'Wasted on them', she felt. She found the characters one dimensional and said she didn't really feel that the two women were 'suffering'. As yes - the interesting question of how 'suffering' can actually result in aesthetic appreciation. I think I covered that in my Schopenhauer essay - but I digress. My advice on 'Adriana'? Don't write it off. Possibly this performance is carried by the stars, and another cast or production might not raise it to the heights so successfully. But I found the story moving (once I worked out what was going on - it's a little too confused with minor characters in the beginning). And the last 'dying' scene, with a long duet between Angela and Jonas - sorry, Adriana and Maurizio - was absolutely absorbing, On a par with the last act of 'Traviata', on last night's offering. As theartsdesk.com put it: 'the greatest Pucinni opera that composer didn't write' (although it's not verismo like Puccini).


If you'd like to read a review of the opera try this one. Or this fan who was also there last night and also loved it.


Can you tell that I loved it? In case there's any doubt: I loved it. 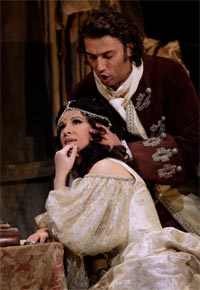