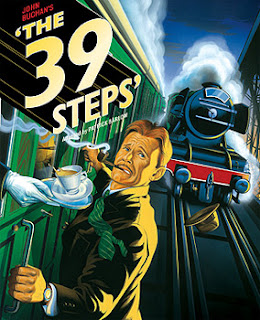 'Man-on-the-run' thriller or riotous comedy? Alfred Hitchcock suspense or burlesque send-up? At the Criterion Theatre, right opposite Piccadilly Circus's 'Eros' statue, the comedy and the send-up win the day. In fact, the play of 'The 39 Steps', which has been playing for about four years now, has won several awards for comedy. What would the author John Buchan have thought of this, I wonder? Or Alfred Hitchcock, maker of the 1935 thriller film adaptation? Or the men in the trenches of WWI, one of whom wrote to Buchan:  "The story is greatly appreciated in the midst of mud and rain and shells, and all that could make trench life depressing."

I think they would all have enjoyed it immensely, as did Ken (in town from Ottawa) and I last night. The Criterion is yet another of those gorgeous, small Victorian theatre jewels with which London is so amply blessed, and even on a Monday night performance of a show that has been running for years, it managed an almost full house. Gong to the theatre seems to be something in the blood of Londoners. We had excellent seats (thanks to Ken's concierge) only four rows back, our noses practically on the old-fashioned footlights. The four-person cast gave us a rip-roaring show with loads of quick scene and costume (and character) changes, and on a tiny stage brought to life not only Richard Hannay's famous flat in Portland Place, but the Forth bridge, the Scottish moors, and the London Palladium. Pretty good going, I'd say.


As one reviewer put it, the play is staged in the Criterion,  "the ever so slightly shabby theatre under Piccadilly Circus - a venue to which it seems eminently well suited. That's not a criticism; there's an endearing amateurish quality to this inventive production where Buchan's large cast of characters are taken on by a four man cast."


John Buchan (1875 - 1940) wrote over fifty books, many of then thrillers. His hero in "The 39 Steps", Richard Hannay, appeared in four subsequent books. "The 39 Steps" is considered to be the first "man-on-the-run" thriller of the genre taken up with enthusiasm by Hollywood and television. Buchan wrote it in 1914 on the eve of WWI. Here's an interesting factoid - noted enthusiastically by my visitor from Ottawa - Buchan went on to a career in politics, including a five year stint as Governor-General of Canada. While he was in this job, a tribe of Canadian Indians made him an honorary chief with the name "Teller of Tales". Great life story, eh?

Of course, those of you who are unfamiliar with the book, film or play may ask - as Hannay asks "Mr Memory" at the end of the play: "What are the 39 steps?" The answer - like so many accurate answers - is "it depends". In the book and several film versions, the 39 steps refers to physical steps, albeit located in different places and with different significance to the plots. In Hitchcock's film, and the play, Mr. Memory compulsively begins to answer, "The 39 Steps is an organisation of spies, collecting information on behalf of the foreign office of ...."  -- and then he is....well, I won't be a complete spoiler.


Alfred Hitchcock made his movie in black and white in 1935, and departed rather radically from the book (a slim volume, which I purchased for three pounds from the usher last night) -- mainly by adding in some women, glaringly absent from the book. Thus we acquire a mysterious foreign femme fatale, stabbed in the back early on; and a charming upper-class twit of a blond who becomes Hannay's love interest. Oh, and a couple of strange Scotswomen. These all survive in the play, and are all well-performed by Laura Rogers. Hannay is played by Rufus Wright, and all the other roles, rather frenetically, by Dermot Canavan and Sean Kearns. The writer of the adaptation - Patrick Barlow - also deserves mention, as it is presumably he who is principally responsible for taking a Boy's Own Adventure and turning into slapstick.


The book is, naturally, of its time and social milieu, and parts do rather lend themselves to send up. But the story, and the genre it spawned, remains wonderful entertainment. Five stars to this one.


The program describes something called "The Cult of the Great British Hero" - and they are not talking about cricketers or Scott of the Antarctic. This interesting bit of history bears reporting: 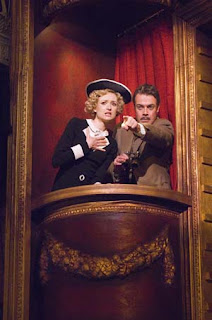 John Buchan's Richard Hannay is one of the most enduring heroes from the Golden Age of   the fast-moving adventure thriller, and his character and actions have formed the blueprint for a whole gallery of similar characters...it was really in the Edwardian era that the gentleman adventurer came into his own. Ans it is probably no accident that he was a distinctly English invention - with the Empire at its height, the Britisher at home and abroad was cock of the walk and monarch of all he surveyed. ...The character and attributes of the hero were standardised early on. He was invariably dashing, resilient and courageous, unfazed by the prospect of a horrible death and focussed unswervingly on the matter in hand. Superior in every way to the scurrilous enemies with whom he locked horns, he was also unblushingly snobbish and xenophobic and as ruthless as his adversaries. Sapper's 'Bull-dog' Drummond was a typical upper-class thug of the time treating both enemy and his social inferiors with equal disdain. Leslie Charteris' Simon 'The Saint' Templar and John Creasy's 'The Toff' were equally superior and condescending loners. These worhty ancestors went on to spawn imitators and descendants by the cartload. Think of Ian Fleming, Alistair Maclean, Wilbur Smith - their heroes go through their dour and punishing (not to mention highly lucrative) paces for our amusement, though they themselves are humourless to a fault.While the pre-war yarns were full of guns, speeding express trains, flooding caves and violent explosions, the stories in the twenties and thirties took on a harder, more realistic feel...The boastful swagger of the bluff superheroes no longer cut the mustard, and in order to survive the adventure story had to come down to earth. It gradually became more literate, more plausible, more mature...It also grew sufficiently to encompass the spy story. In the grey fifties following WWII, it found its greatest hero in the hard and glamorous shape of James Bond, a much more brutal and humourless figure on the page than he became on the screen...As the genre became ever more sophisticated and diverse, the moral dilemmas on which the plots turned became more subtle, ushering in the spiritual disillusionment of John Le Carre's George Smiley and the morally burnt-out Alec Leamas of 'The Spy Who Came In From The Cold'......the attributes of the hero will remain broadly the same. The issues are fundamentally black and white. Good must always triumph because that's what fiction means...Whether he...sports a heather mixture hacking jacket or a pair of day-glo underpants over his tights, the hero is always the man we would like to be for our own kids. He is the perpetual winner par excellence, and in an increasingly complex world his simple morality remains our anchor and our rock...It's a comforting thought and a necessary one. That's why the spirit of Hannay marches on, and that's probably why the majority of you are here in the audience tonight." [John Good]

Well, it wasn't quite why I was in the theatre last night (that was more to do with Ken's concierge's recommendation), but I'm willing to accept all this in the spirit in which is it intended. I enjoyed myself. 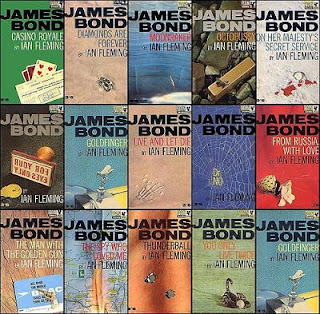 Posted by Annette Freeman at 11:39 PM