So how should I approach the subject of the corrida de toros, bullfighting, the ‘sport’ that everyone knows as Spanish. I could deride it as a barbaric spectacle, which it certainly is.  Or I could try to imagine what it is that excites the aficionados – danger made into an art form? Ernest Hemingway explains it like this: 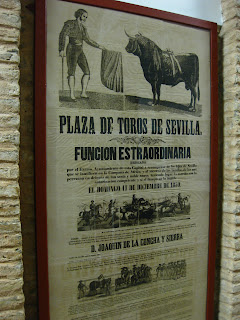 Aficion means passion. An aficionado is one who is passionate about the bullfights. All the good bullfighters stayed at Montoya’s hotel; that is, those with aficion stayed there...We often talked about bulls and bullfighters...We never talked for very long at a time. It was simply the pleasure of discovering what we each felt. Men would come in from distant towns and before they left Pamplona stop and talk for a few minutes with Montoya about bulls. These men were aficionados. Those who were aficionados could always get rooms even when the hotel was full...Somehow it was taken for granted that an American could not have aficion. He might simulate it or confuse it with excitement, but he could not really have it. When they saw that I had aficion, and there was no password, no set questions that could bring it out, rather it was a sort of oral spiritual examination with the questions always a little on the defensive and never apparent, there was this same embarrassed putting the hand on the shoulder, or a ‘Buen hombre’. But nearly always they wanted to touch you to make it certain. Montoya could forgive anything of a bullfighter who had aficion. He could forgive attacks of nerves, panic, bad unexplainable actions, all sorts of lapses. For one who had aficion he could forgive anything... [‘Fiesta: The Sun Also Rises’, 1922]
Seville’s bullfighting ring is one of the biggest in Spain, and the season opens shortly, so you can get your tickets soon if you want. The season runs from April until October, with a great burst of fiesta around Easter. The bullfights are almost all in the traditional three-part form: First the bull is harassed by the picadores on horseback, piercing its shoulders with a lance, to weaken it; next the banderilleros pierce it further with short daggers; then the torero, on foot with a bright cape, executes some artistic and life-risking movements before killing the bull with a sword. Rarely, all three phases are undertaken by a bullfighter entirely on horseback. Charming, eh?


In parts of Spain – especially in Andalusia and around Madrid, the corrida de toros remains very popular, although in other parts of the country it is rarely or never seen – Catalonia has recently gone out on a limb and tried to ban it. The word ‘bullfight’ is an English expression, as is matador: in Spain the events are corridas de toros (‘running of the bulls’) and the fighters are toreros (‘toréadors’).
The bullfight ring in Seville is not only one of the largest, it is also the oldest in Spain, with construction beginning in 1761. Its full name is The Plaza de Toros of the Real Maestranza. If you take a tour of the Plaza, as I did, you will be able to see the arena itself, the 1765 Prince’s Balcony, used only by the Spanish Royal Family (now that they have one again), an Art Gallery and Museum under the stands, the Bullfighters’ Chapel (pre-fight prayers being considered vital) and the Horses’ Courtyard. The horses run some very great risks in bullfighting too. In the old days, may were gored, although these days they wear padding to protect their flanks.
A typical fight program includes three toreros and their teams who fight three bulls each. Each bull takes on average about 20 minutes. Your ticket gives you about three hours of...what?...excitement in the pit of your stomach? Awe at the toreros? Thrills? When the bull is killed it is usual for the torero to cut off one of its ears, or sometimes the tail, for a trophy. In days gone by they would sometimes present one of these trophies to their lady love, sitting in the stands watching the exploits of her man.  Very occasionally, the crowd will be impressed by the courage of a particular bull and will petition the President of the fight to spare its life.
And does it occur to you to wonder what they do with all those dead bulls? Nine per session? Steaks, that’s what. I found out that in the old days, the bulls were given to the poor of the city; later they were the property of the bullfighter, presumably as part of his fee. These days, they are merely sold to the local butchers. A few bull heads are taxidermied, and if you see such a trophy on a wall somewhere, you’ll know it’s a bull that died in the ring if one of its ears is missing.
The bullfights started out as a kind of exercise for military cavalry men to improve their horse riding skills.  It has come a long way since then, with the artistry and courage of the torero becoming the legendry centrepiece. The torero wears an elaborate traditional costume embroidered with heavy metallic thread, and wields a variety of capes. In Seville, there’s an embroidered number just to flash about a bit at the beginning; then a bright pink one for the real work of attracting and deflecting the wounded bull; and at the end the red cape comes out.


It was of course a handsome toréador who won the heart of Carmen away from Don José, her military lover, in Bizet’s opera Carmen. A statue of Carmen stands across the road from the Plaza de Toros today, watching the toreros from the other side of the road. The opera is set in Seville around 1820, and Carmen is one of the cigarette girls who work in the enormous cigarette factory – which still stands, and is presently part of the University of Seville.

Posted by Annette Freeman at 1:36 AM