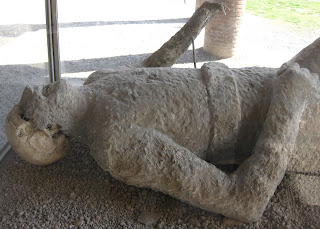 When I was quite young, someone told me about Pompeii. I can’t recall if it was a teacher or a book, but whoever it was painted a vivid picture. The impression I formed was that the lava and ash of Vesuvius had descended upon the inhabitants of Pompeii so suddenly that they were all ‘frozen’ in their tracks, going about their everyday business. Ever since, the immediate image I have whenever Pompeii is mentioned is of a young Roman woman standing in her kitchen holding eating utensils, forever immobilised in an everyday pose. Of course, it doesn’t take much thought to see that this could not be quite right, since you would have some warning of being deluged by a major volcanic eruption, no matter how sudden. And I subsequently read about Pliny the Younger who wrote an eye witness account of the eruption – including stories of people fleeing. His uncle (Pliny the Elder, naturally) was in fact killed by the hot ash when he went sightseeing by boat from Naples, to check out the excitement. But nevertheless, I have never been able to shake the image of the young woman. She may never have lived, but somehow she lives in my mind’s eye. Perhaps it is more the thought of the horror of Vesuvius that I can’t shake.

Visiting Pompeii, some of the truth my childhood image is verified. The most extraordinary thing about Pompeii is that it is so well preserved. I cannot begin to imagine what a task it was for the archaeologists to dig it all up – although it was buried in ash, rather than lava and mud (as was Herculaneum, closer to Vesuvius). But it remains the most well-preserved and evocative example of a Roman settlement anywhere. The streets, houses, shops and public buildings are clearly definable, and extend over quite a large town area. Many everyday household items were retrieved (as the Naples Archaeological Museum attests). I found the eerie atmosphere in quite spooky accord with my childhood image of Pompeii.

The town did have warning of the eruption, and a large number of its roughly 12,000 inhabitants were evacuated. But about 3,000 are estimated to have stayed in town, and to have perished. We can only guess how many were slaves, but certainly some. An archaeologist named Fiorelli, working in 1858, was responsible for the bright idea of making plaster casts of the cavities found in the hardened ash where bodies had perished and disintegrated. Thus, you can see on display several people-shaped casts, their small bodies, agonised features and wide-flung limbs speaking eloquently from their far-away graves.

Fiorelli also numbered the streets and named some of the houses – usually they have been named after objects found in them, or the subjects of frescos or mosaics, resulting in poetic names such as ‘The House of the Dancing Faun’, ‘The House of the Tragic Poet’ or ‘The House of the Surgeon’ (where grisly surgical instruments were found). The houses in Pompeii are rather lovely. Generally they are all laid out similarly: a gate on the street leads to an entrance hall, which opens into an atrium usually containing a fountain, which opens in turn onto a dining room, and then an inner garden. Some of the bigger houses have two gardens. Small rooms for bedrooms open off the atrium. It is a wonderful design, and I don’t know why we don’t use it today. Pompeian house were decorated all over with wonderful trompe l’oeil frescos and marvellous mosaics, and had running water (the lead piping can be seen running down the streets). As is clear from the Museum exhibits, they were filled with lovely household objects of glass, ceramic, bronze and silver.


Many streets were lined with shops (I exclude the pizza cafeteria which is open for business today). The function of many is clear – there were wine shops on every block, sometimes next door to one another; and many bakers’ establishments with grinding wheels and ovens. The wine shops have big vats from which mulled wine was sold – the Romans liked to drink their wine warm, with honey and spice (cinnamon, I think). Wine was produced all around Pompeii – it was one of the towns’ busiest industries. The vineyards were on the slopes of Vesuvius. You can also visit the wool market (complete with a small side room for pissing into the urine pots – urine was used as alkaline to wash the greasy wool – one emperor taxed it at one point); the grain market with an ingenious measuring system of different sized bowls; and the fish and food market with frescos describing just what went on.

Away from the mercantile, you can see the wide and handsome forum with a Temple to Jupiter at one end, and to the emperors at one side. There is the extensive three-naved basilica where justice was dispensed; and not one but two theatres, a gymnasium and an auditorium for gladiator fights. Plus many brothels – you can walk through one which has its roof, stone beds in little rooms, and some very explicit frescos illustrating what the customer might expect to receive. It is thought that most prostitutes (it was not an illegal trade) were slave; and many of the customers were likely sailors – the sea came right up to the city walls of Pompeii. Here and there, stone penises point the way to the nearest brothel.

It seems to me that life in Pompeii was quite luxurious. Its civic history indicates that it was also very peaceful and settled, for over 500 years: a quite astonishing thought. The earliest reports of a city on the site go back to the 7th and the first half of the 6th century BC, when the first walls were begun. In this time the settlement was Greek – the remains of a Greek temple can still be seen; and the street layout is typically Greek. Various peoples lived there over the 5th and 4th centuries BC, including Etruscans and Samnites (both native to the land we call Italy). Towards the end of the 4th century BC Rome began to cast its eye southwards, and through military campaigns and alliances the early Romans took over most of Campania (the land around and inland of Naples). Pompeii thus entered the Roman political sphere (or res publica) as an ally. There was a bit of trouble around 90-89 BC, with a small rebellion being put down by the Romans; resulting in the city becoming a Roman colony. Although this was considered a ‘downgrade’, it did mean some investment by the Romans in public buildings after 80 BC.

Pompeii was a medium sized provincial city; not aspiring to the glories of Rome, but nevertheless sharing in the prosperity of the empire, and the engineering, art and artisan skills of the Romans. I think I could have lived there (though it might have been best to be a male, as always). I would also choose a period shortly after 80 BC, I think; because in 62 AD Pompeii was struck by a major earthquake. Some think that this was a precursor to the eruption 17 years later, on 24th August 79 AD. The earthquake caused major damage and the town was still undergoing repair and reconstruction when Vesuvius put an end to it. There is no sign that the surviving inhabitants made any major effort to return and rebuild.

My guide Dolores and I spent about two hours at Pompeii. She warned me that we would only be able to see selected sites. I really feel that I want to go back, and retrace all the sites named in my small guide book; to see the baths and the necropolis, the walls, the triumphal arches, the temples and the houses. But time waits for no tourist on a schedule. Our next stop was equally evocative, however, and a suitable complement to Pompeii: the excavations of the neighbouring town of Herculaneum. Herculaneum is a much smaller site, for a couple of reasons: it was closer to Vesuvius and so was buried in lava and mud, much more difficult to excavate than the ash that buried Pompeii. Secondly – the modern town of Erculanum was built over the top of it. Today you can see the modern houses teetering on the very edge of the excavations, with some tunnelled exploration boring underneath them.

The ancient town of Herculaneum was a resort town, at the seaside, with boat sheds, a lovely gymnasium with an indoor swimming pool in the shape of a cross, a wonderfully preserved bath house with a frigidarium, tepidarium (where you got your massage) and caldarium. A spa resort, in fact. The houses here have had roofs replaced, in some cases wooden doors are still extant, though charcoaled to crisp. Some houses have lovely gardens and a view of what would have been the sea, before that great wall of lava rock formed. In Herculaneum, most of the population seems to have escaped, except for about 300 poor souls who crowded to the seaside hoping to escape in boats. Their skeletons were found there in a huddled mass.

Sobered, and with the sky appropriately clouding over for a thunderstorm, we made our way back into Napoli. Much food for thought. I think I will still remember the young lady of Pompeii in her luxurious house, dead in her tracks as Vesuvius spewed its ash and poisonous gas. I don’t think her image is too far from the truth of what happened.

Posted by Annette Freeman at 5:24 PM