England has many pretty corners to which visitors flock, but East Anglia doesn't usually make the running against the Cotswolds, the Lakes District, Devon and Cornwall. So here’s a few pictures to redress the balance a little...

Heading to the coast from the Norfolk Broads, you can, if you are able to find it, stand on England’s Easternmost point. By this stage you will be in Suffolk. The Easternmost point is on the North Sea coast in sunny (well, sometimes) Lowestoft. It is apparently marked by a marker, which I didn’t manage to find, becoming as I did embroiled in the rather unedifying streets of semi-industrial Lowestoft. However, I did manage to find a seawall, a light house and a cafe which proclaimed that it was “Britain’s Easternmost Cafe”, so I was satisfied.

A little further south in Suffolk I found a rather magnificent medieval castle, Framlingham Castle, perched golden and imposing on a hill above the town of Framlingham. The Castle keep was locked up for the winter (though the nearby pub was open), but I was able to roam about a bit and gawp at the massive ex-moat, and the great walls and towers.


Then on to Aldeburgh on the coast, famous for an annual festival, and a lovely church, St Peter & St Paul. My objective here was to find the stained glass window installed as a memorial to composer Benjamin Britten, and to find his final resting place in the churchyard, alongside his partner Peter Pears. Dusk was falling rather quickly - it was 4 pm in November - and though in the dark church I found a window which could possibly be the right one, and in the churchyard a sign which pointed rather vaguely to the grave sites, I never did find that special place. Instead, I experienced wandering around a country graveyard in the dark. Very atmospheric, I must say.

After becoming comprehensively lost driving in the dark, the GPS finally got its act together. My evening was then spent cosily ensconced in front of a fire at the Black Lion Inn in Long Melford, a village known for an even bigger church - rich wool merchants in bygone times, I’m told - and being the setting for the TV series ‘Lovejoy’ (which, unusually for me, I remember fondly). The next day I found the nearby village of Lavenham, also featured in said TV program. It looks like a set, too: ‘Tudor Village’. Both have many antique shops (Lovejoy was an antiques dealer). Lavenham, however, was a grave disappointment on the food front. Pub food is awfully hit and miss. 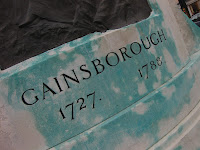 My southern Suffolk objective - indeed, I think I strayed into Essex - was the country of the painters. In a large-ish town called Sudbury I found the house of portrait painter Thomas Gainsborough; and in a very small village called Flatford I found the very scene of John Constable’s 'The Hay Wain'. This made me very excited for a while. Locals trim the trees to make the scene continue to resemble the painting, done in 1821, as far as possible, but the meadows in the distance are now blocked from view. Still - very good, I thought. Constable was born nearby. 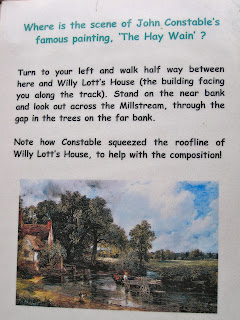 I headed home with an excellent swag of sights ‘bagged’. Although I do need to go back to East Anglia, because I missed the village of Wells-Next-The-Sea, and with a name like that I think it is important that I see it.