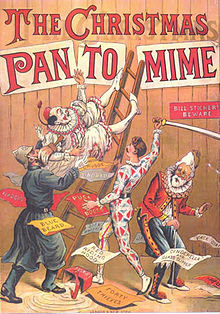 The distinctly English Pantomime is In Season: London is awash with them. Yes, Christmas is the time when grown men dress as women to amuse small children. If you are unfamiliar with pantomime - and it is a genre reserved mainly for England and its ex-colonies - you might find the whole thing a bit puzzling. There are a number of rituals associated with a true panto, and most are followed closely today. The result of it all is a spectacular show, aimed principally at six year olds but amusing for everyone. Actually, the  content of a panto is traditionally risque, the adult jokes supposedly going over the heads of the youngsters - in theory, anyway.

I had experienced panto in Australia, but thought I should check out the traditional English version. It so happens that, at the moment, a panto presentation of “Dick Whittington and His Cat” is playing at the New Theatre in Wimbledon, with the added extra of a famous Australian cast member: Dame Edna Everidge, a.k.a. Barry Humphries. The combination is, I think, a roaring success. Dame Edna is ostensibly a fairy who puts things in the story to rights, but in reality (obviously I use the term loosely) she spends most of her time giving us a commentary on what is going on, panto in general, and other more random matters. “The stage is full of non-entities in period costume”....”You might wonder what a giga-star is doing hanging over a stage in Wimbledon on a Saturday night...I wonder about that myself.”

Pantomime owes a lot to to the traditions of vaudeville and the music hall, and indeed its roots go back to the Mummers Plays of the middle ages, and the roving performances of the Commedia dell’arte players. When I looked it up on Wikipedia, I found a list of performance conventions found in pantomime, almost all of which featured in the panto I saw. Here is Wikipedia’s list and its realisation on the stage of the Wimbledon New Theatre:

Our show was terribly up to date, with a film sequence in 3D, for which we all donned cardboard glasses. It had been worked into the show in a rather sketchy way (a random turtle had to be introduced), but no matter - the kids loved it. What with fancy film effects AND Dame Edna, this was a panto which gave value for money.
Which reminds me of Edna’s gentle jibes at the people sitting in the upper balcony: “the paupers”, as she referred to them. “Don’t worry possums, as the show progresses I will look up at you now and then. In direct proportion to the amount you paid.” 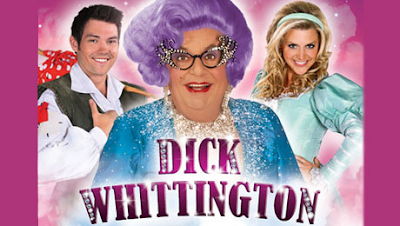 Images from: http://www.atgtickets.com/Dick-Whittington-Tickets/7/209/#showinfotabs=overview
and: http://en.wikipedia.org/wiki/Pantomime
Posted by Annette Freeman at 1:44 AM