Those paying really close attention may recall this post on the mosaics of Palermo, Sicily, and very impressive they are too. In Ravenna, in the north of Italy, there is another cache of very fine mosaics, and these are much older, dating from the 5th and 6th centuries. Ravenna was the seat of the Roman Empire - yes, you read right, the actual seat of the actual Roman Empire - in the 5th century. It then became a Byzantine town until the 8th century.

Ravenna today is a quiet, sophisticated, refined sort of place, with a lovely main piazza and intriguing back streets. If you’re not careful, a review of the mosaic can get a little overwhelming - there are eight main sites, all dating from the 5th & 6th centuries:  the Mausoleum of Galla Placidia, the Neonian Baptistery, the Basilica of Sant'Apollinare Nuovo, the Arian Baptistery, the Archiepiscopal Chapel, the Mausoleum of Theodoric, the Church of San Vitale and the Basilica of Sant'Apollinare in Classe.

We visited three of them. The Mausoleum of Galla Placidia is a small, dimly lit devotional building housing the tomb of, well, Galla Placidia, a daughter of the Roman Emperor Theodosius I, and various others thought to be her brothers or sons. In a bizarre aside, the mausoleum is said to have inspired Cole Porter to write his song “Night & Day” when he visited in 1920. I told you it was dimly lit.

The Basilica of San Vitale, nearby, is a massive thing. When you step into the main nave the sheer scale and colour of the place astonishes, before you even realise that the colour comes from tiny mosaic tiles, put together with consummate artistry over 1500 years ago. San Vitale was the highlight for me. The church itself is interesting because its layout reminds of Islamic mosque architecture - I was put in mind of the Hagia Sophia in Istanbul - but of course it predates the establishment of Islam.

Our third “mosaic stop’ was the Basilica of Sant'Apollinare Nuovo, built a little later than the other two sites, and partially destroying WWI. This church was originally built by a Goth King named Theodoric as a Christian Arian church, a sect later outlawed. One story has it that Pope Gregory The Great ordered that the golden mosaics be blackened over, as they distracted worshippers. Despite war damage and years of various ‘renovations’ what remains is astonishing, especially considering its antiquity.

As for the streets of Ravenna, you could spend many a happy hour strolling, window shopping or tasting the local specialities. And - an added bonus! - Ravenna is also home to the tomb of Dante Alighieri, Dante of ‘The Divine Comedy’ fame. Recommendation: put Ravenna on the list. 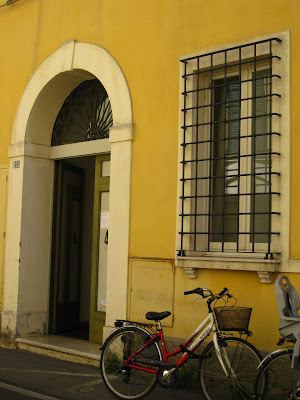 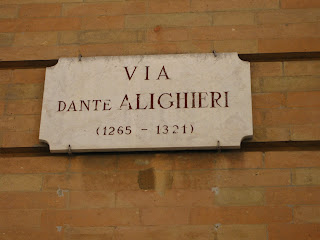 Map from: http://www.pickatrail.com/jupiter/location/europe/italy/ravenna.html
Posted by Annette Freeman at 4:54 PM