So - there were the Ancient Greeks, and then Alexander the Great wreaking havoc; and later the Romans...but in between there were the Alamids of Pergamum. They built a wonderful Hellenic city on the Eastern seaboard of what is present-day Turkey, which attracted the best architects, sculptors, artists and writers of the day, and rivaled Athens for classical splendour. 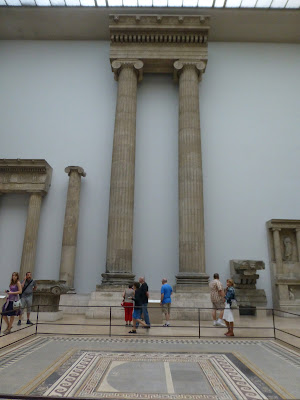 The Alamids seem to have been a very peaceable family, and the kingdom passed from one to the other with minimal fuss. They were good diplomats and the Romans were their allies. In fact, Alamid III went so far as to will his kingdom to Rome, an unprecedented move which no one has ever repeated. Rome looked after Pergamum too, except for Mark Antony, who famously gave away Pergamum’s wonderful library - all 200,000 volumes - to Queen Cleopatra. That guy was really lovestruck. I’ve yet to discover what happened to this library after Cleo met her sticky end.

There were three great libraries of the ancient world: at Ephesus, Alexandria and Pergamum. An apocryphal story says there was rivalry between Alexandria and Pergamum, and the Egyptian pharoh put a ban on the export of papyrus to Pergamum to prevent the library there from expanding. But the Pergamum ruler managed to find an inventor who came up with goat-skin parchment. The word “parchment” is supposed to be derive from “Pergamum paper”. But that’s just guide-book talk, and I make no claims as to its accuracy. It’s a good story though.

It was Tamerlane, bursting through from the East, that eventually laid waste to beautiful Pergamum. In the nineteenth century, German archaeologists began to dig it up again, and piece together the history of its glory days. They are still at it, though these days they tend to leave what they find in situ. If you travel to the Turkish town of Bergama you too can visit ancient Pergamum. But if you can’t get to Turkey, you can see large bits of Pergamum in the Pergamum Museum in Berlin - in particular, the “Great Altar”, a kind of triumphal temple, clearly based architecturally on Athens’ Parthenon. The German museum has created a life-sized replica, with the extant bits from Pergamum sited where they would have been back in the first century BC. The very deeply carved frieze that surrounded the Altar is particularly amazing. The museum also has columns and capitals and some lovely mosaic pavements.

It’s one of those cases where we have it because the archaeologists dug it up and preserved it, but there’s a feeling also that it’s sad to see these things indoors in Berlin when they should be outdoors in Turkey. 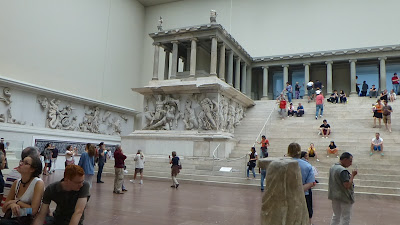 Posted by Annette Freeman at 7:59 PM