The Second-Last Night of the Proms


It has been Proms season again in London - that two month period in the summer when Londoners come out to enjoy classical music, presented by some of Britain and the world's best bands, principally at the Royal Albert Hall in Kensington.

One can buy Proms seats like any other performance; but the slightly quirky angle is that one can alos pay only five quid for a "promming" ticket - entitling one to stand in the arena, or in the rarified air of the upper gallery, of the RAH. Standing for two or three hours to listen to music may not be you or my idea of the very best way to enjoy a concert, but plenty of Londoners would disagree with us. They've been doing it for 118 years - here's the history. The BBC Proms website - it is the Beeb that presents the Proms concerts - describes "How to Prom":

The popular tradition of Promming (standing in the Arena or Gallery areas of the Royal Albert Hall) is central to the unique and informal atmosphere of the BBC Proms.
Part of the Proms audience has always stood in the Arena, directly in front of the orchestra, and many consider this the best position in the hall. However, you can also stand high up in the Gallery and just let the sound drift up to you.
Up to 1,400 standing places are available for each Proms concert at the Royal Albert Hall. The traditionally low prices allow you to enjoy world-class performances for just £5.00 each (or even less with a Season Ticket or Weekend Promming Pass). There are two standing areas: the Arena, located directly in front of the stage, and the Gallery, running round the top of the Hall. All spaces are unreserved.


Being rather unadventurous, and really wanting to see a couple of great concerts, I took the precaution of booking a couple of seats. At 'Prom 69' I heard the wonderful Leipzig Gewandhaus Orchestra under the baton of Riccardo Chailly play Messiaen (difficult) and Mahler (glorious). At 'Prom 72' I was blown away by John Adams conducting a semi-staged performance of his own 1987 opera 'Nixon in China'. I'm still recovering from that transcendant experience, especially Kathleen Kim as Madame Mao waving "the book! the book!" at the end of Act 2. Those high notes! The drama! All the singers were brilliant - the baritone Gerald Finley is now absolutely on my faves list.


But what of the Prommers? Looking down from my seat in the rafters of the choir, I observed the protocol. The doors open 45 minutes prior to curtain-up, and those who have presumably queued for the privilege make a dash for the prime spot - front line along the stage. Other saunter in more mildly and take up central positions, often chatting amongst themselves. There seems to be a white line around the rim of the arena where there is "no standing". There also appear to be about half a dozen seats reserved for less mobile people - not sure how you secure those. Prommers seem to sit on the floor until the performers appear. Indeed, some sit right through, or partly through, the performance. They tend to be at the back of the bunch, presumably happy to hear but not see the performers. It seems to me that standing for so long must be distinctly uncomfortable, but there are quite a number of downright elderly people amongst the Prommers. As to what goes on up in the gallery -- we'll see. 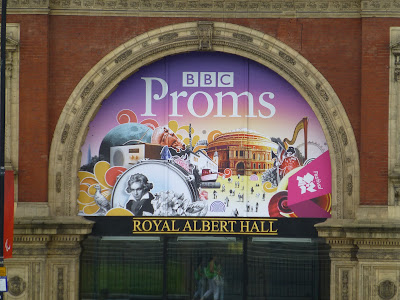 In the interests of research, I took myself and my Gallery Season Pass along to the second-last night of the Proms. Arriving just on 45 minutes before curtain-up, I joined the end of a not very long queue which shortly began entering the RAH, and making its way up a great number of stairs to the gallery - an eyrie in the rafters that gives a great, if distant view of the whole auditorium. It was nice up there. Surprisingly few people. I watched what other Prommers did, and secured myself a cosy spot standing at the gallery railing beside a pillar. There were three or four others there when I joined them. In a little while our ranks swelled to six ir seven, plus a handful of standers-behind. There was still masses of space in the gallery. A number of people chose to sit themselves against the back wall right from the start - 'comfort' (though I use the word loosely) over view and sound quality, I guess. Still, some did bring their yoga mats to sit on.

First, the music. The Vienna Philharmonic playing Haydn's 'London' Symphony (his 104th and last); then after interval Richard Struass' 'Alpine' Symphony, or tone poem. The Haydn was short and sweet. Ideal for a first time Prommer. The Strauss was absorbing and wondrous, also ideal for a first time Prommer. I really didn't notice the standing up. Much. It helped to have the rail to lean on. Various position changes helped, but at no point did I need to sit down (which was lucky, because I'm not very good at the lotus position on a hard floor. Or on any floor.)

As to my fellow Prommers, conversation broke out easily. The Portuguese music lover next to me discussed possible strategies for dealing with The Last Night. A young lady said she had come "on a whim". She hadn't heard of Haydn, and her friend and I had to explain that the Strauss wasn't "the waltz guy". But she seemed to enjoy herself. Things got chummy. Spots were minded, programs lent.

I learnt that you are not allowed to bring your own food and drink into the auditorium, a stricture which bags of picnic goodies blithely ignored. I learnt that there are a few seats along the back wall available for Prommers, and they are supposed to be for people who can't stand, though Prommers have to work out amongst themselves who is the most decrepit and seat-deserving. I learnt that while they send a program seller up to the gallery, they don't send an ice-cream seller. Oh, and the loos are two floors down. I mention this because unless you hear from someone who has been at the front, so to speak, you will never have this information.

And The Last Night? between my new Portuguese acquaintance and one of the door ladies whom I questioned closely, it seems there are secret protocols and Special Orders for Prommers. None of these had previously been communicated to me; I had (foolishly, it turns out) trusted merely to the assurance in the ticket-buying information that access to The Last Night was guaranteed for season pass holders, of which I am one. It seems, however, that there is a whole arcane queuing system at work. One can put one's name down at the stage door, I was told, obviating the necessity to camp out overnight (!) But one has to be in the queue by 10 am and receive a number, and still be there when they check at two-hourly intervals throughout the day, until the doors open at 6 pm. When I suggested that this was fine for those who wanted a prime position, and I had a guaranteed entry, and perhaps I'd just come along at say 6 pm...I was met with a puzzled look. The implication seemed to be "why wouldn't you want to queue?" The door lady gave me a copy of her instruction sheet. All she said seemed to be true.

I toddled off, stunned. "Barking mad, the English", I thought. No concert could possibly be worth this hassle. I nearly tripped over the first camper. At home I searched the internet for clues to this puzzling behaviour. I found the queuing rules for the Last Night; I found descriptions from English people of how it all works, and the assurance that "it is all very civilised". Excuse me? You sell me a ticket and then it is "civilised" to require me to stand from 10 am to 6 pm in a queue? I also found the comment that the system was in place "for fair queuing". These people are insane. What is it about queuing that attracts them? The longer the queue, the happier they are to be involved with it.

However, I also found the repeated statement that season pass holders (that's me, remember) are guaranteed entry to The Last Night - provided only that we turn up more than 20 minutes before the performance. So as I see it, I can get there when the doors open, join the queue, and trot on in. Yes, I may - indeed, certainly I will - have to be content with a spot standing somewhere at the back of the gallery, all hopes of a view obscured by other standing Prommers. But they have to let me in. Don't they? It's only fair, surely. And civilised.

In case you're wondering, the seats in the auditorium - all 4,500-odd of them - are allocated much earlier by ballot. I did find a ticket scab site offering one seat high in the circle for £400, plus £80 in "service fees". You may also be wondering what kind of amazing concert this is that it can command such prices, such demand, such queueing stupidity. Frankly, I don't really know. The attraction for me is that an excellent operatic tenor named Joseph Callaja is involved; and also I'm interested to observe the species "Englishman" at one of its curious rituals. Yes folks, these people camp overnight for the joy of singing "Land of Hope and Glory" with their fellow English people. I'm told they do that. In fact, as a warm up there is a singing workshop across the road in the Royal Academy of Music. Cor blimey.

Here is the Vienna Philharmonic playing part of Richard Strauss' 'Alpine' Symphony -- "Sunrise"--  at the 2012 Proms: the Second-Last Night of the Proms, my first promming experience:


Posted by Annette Freeman at 8:12 PM