The remains of St. Andrew were reportedly brought to Amalfi from Constantinople in 1206 during the Fourth Crusade. In 1208, the crypt was completed and the relics were turned over to the church. It is said that ‘Manna’ issues from the saint's statue in the crypt on his Holy Day. The saint’s skull is now held in the crypt (returned to Amalfi in recent years) and can be viewed by appointment. It’s kept in a special gilded box behind the screen in the crypt.

The newer cathedral was built next to the older basilica that was built on the ruins of a previous temple. The two were once altered to form one internal structure with several aisles, but they have now been returned to two separate areas. The older space - the Basilica of the Crucifix (Basilica del Crocifisso) - is used today as a museum containing several lovely old wooden statutes and some precious liturgical items, but is particularly interesting because you can see now the bare, restrained style of the oldest part of the complex.

The church interior: a wooden 13th century Crucifix hangs in the liturgical area. Another crucifix, made of mother-of-pearl, was brought from the Holy Land and is located to the right of the back door. There are a number of paintings displayed. A silvered effigy of Saint Andrew which is paraded on his Holy Days, and an effigy of the Passion which is paraded at Easter, are both on view. The large font is Roman, made of Egyptian porphyry.

The High Altar in the central nave is formed from the sarcophagus of the Archbishop Pietro Capuano (died 1359). Above the altar is a painting by Andrea dell'Asta of The Martyrdom of St. Andrew. The boxed ceiling dates to 1702 and its artwork includes the Flagellation, the Crucifixion of the Apostle, and Dell'Asta's 1710 ‘Miracle of the Manna.’

The triumphal arch over the altar is held up by two Egyptian granite columns. There are two additional twisted columns and two pulpits that were part of the 12th century ambo. The columns are said to have come from Paestum (so would be Greek). One of the pillars boasts a hidden column as an example of the ancient Romanesque structure.

Exterior: The front facade was rebuilt in 1891 after the original one collapsed. It is of striped marble and stone with open arches that have lace detailing not commonly found in Italian sacred architecture; but the tiled cupola is quite common amongst churches of the area.

The tympanum’s mosaics portray “The triumph of Christ” in a work created by Domenico Morelli and whose original designs are retained in the Town Hall. Sixty-two steps, wide and steep, lead up to the doors (creating a particular obstacle for funerary processions, both up and down!) The great bronze doors were cast in Constantinople before 1066, and are signed by Simeon of Syria. They are the earliest in Italy of post-Roman manufacture.

The bell tower is the oldest part of the building that can be viewed from the piazza. It was begun in 1180, and completed over 100 years later. The style is Romanesque and the tower sits off-center. The structure includes four small towers of Arab architectural type that are adorned with arches and are covered with majolica tiles. During times of war, the bell tower was used for defense.

There is a cloister garden containing colonnades, arches and sculptures, and some remains of frescoes and sarcophagi. The strong oriental influences are apparent in this so-called ‘Cloister of Paradise’ - Chiostro del Paradiso.

Amalfi is a town and comune in the Province of Salerno in the region of Campania, Italy  on the Gulf of Salerno, about 47 kilometres southeast of Naples. It lies at the mouth of a deep ravine, at the foot of Monte Cerreto (1,315 metres), surrounded by dramatic cliffs and coastal scenery. The town of Amalfi was the capital of the Maritime Republic known as the Duchy of Amalfi, an important trading power in the Mediterranean between 839 and around 1200. The whole of the Costiera Amalfitana has been included in the UNESCO World Heritage list as an "outstanding example of a Mediterranean landscape, with exceptional cultural and natural scenic values". 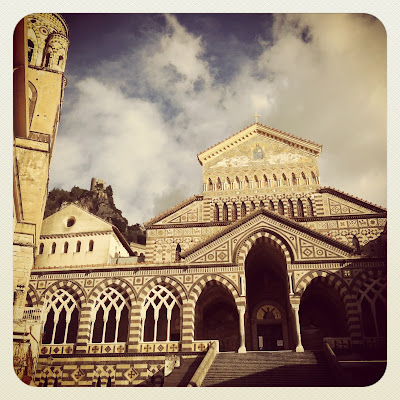 Posted by Annette Freeman at 5:13 AM