Renaissance Italy threw up some dark and dangerous characters and stories. Lucrezia Borgia (1480 - 1519) for example - daughter of the horribly corrupt Pope Alexander IV and sister of the fierce Cesare; married off as a political pawn three times; accused of everything from poisoning and murder to bearing her father’s - or perhaps her brother’s - child. Or Girolamo Savonarola (1452 - 1498), the priest who saw visions, made prophecies, fought the popes and ruled the Renaissance city state of Florence with violent imposition of his rules and ‘bonfires of the vanities’ - until they hanged and burnt him.

There’s a small city in Emilia Romagna, on the Po River delta, that is, curiously, both the birthplace of Savonarola and the death-place of Lucrezia -- Ferrara, seat of the Dukes of d'Este, back when being a duke mattered. Savonarola stands on a statue in the Piazza Savonarola in Ferrara, forever shrouded and fierce. Lucrezia was married to Alfonso I d'Este, Duke of Ferrara, and was buried in the Convent of Corpus Domini in Ferrara when she died from complications after the birth of her eighth child. The great castle of the d’Este dukes - Castello Estense - still stands in the town centre, surrounded by its moat.

Ferrara’s castle has been rebuilt so often that it’s difficult these days to imagine the atmosphere of the Renaissance, but it has very impressive walls and towers and a handsome and effective moat, still filled today, over which a drawbridge is lowered. The interior is mainly (good) museum displays about the life and times of the Dukes of d’Este, some lovely though crumbling frescoed rooms, and some very evocative dungeons. Yes, the d’Este have their own dark legends...

The Este family were of ancient origin; the first mention of their ancestors goes back to the 9th century. Following internal upheavals in Ferrara at that time, Marquis Azzo VI put himself at the head of the city’s Guelph faction. (The Guelphs and Ghibellines were factions supporting the Pope and the Holy Roman Emperor, respectively, in central and northern Italy during the 12th and 13th centuries, persisting until the 15th century.)


A successor, Obizzo II, was named a signore perpetuo (Lord in Perpetuity) while still a boy, in 1264. In the years that followed, he obtained the same title in Modena and Reggio. Then came years of ferocious fighting, but by the end of the 13th century, Estense power was consolidated and a long period began in which their power transformed Ferrara into one of the most important cultural and political centres in Europe.

The Este’s real prestige began with Niccolò III who was a skilled politician and diplomat who arbitrated numerous disputes between city states, and in 1483 hosted an Ecumenical Council. His successor Leonello was a refined intellectual, a friend of artists and men of letters. His successor Borso was the first to gain the title ‘Duke’, from both the Pope and the Holy Roman Emperor.

Ercole I was one of the most important patrons of the arts in all Europe. He supported music and musicians, and had at his court the principal musicians of the era. He encouraged theatre, loved architecture, and had created the whole north part of Ferrara, to the designs of Biagio Rossetti. His wife was Eleonora of Aragon.

His successor Alfonso I also supported the arts, though he was often away, busy with wars. His second wife was Lucrezia Borgia, who acquired a reputation (in Ferrara at least) as a shrewd and honest woman.

Ercole II, married to Renata of France, had to confront a period of religious reform. The era of Alfonso II signalled the decline of Estense power in Ferrara - he died without heirs and Pope Clement VIII refused to let his cousin Cesare take power in Ferrara, and demanded the ‘restitution’ of the city to the Papal States. Cesare decamped to Modena and set up court there.

But this story of centuries of power and ducal splendour is not without its dark legends. One, known as ‘The Plot of Don Giulio’, adds a special frisson when you tour the castle and its spooky dungeons. It goes like this...


Guilio and Cardinal Ippolito, brothers of Alfonso I, had held grudges and differences with each other from long ago. There came a time when they were in love with the same woman, probably Angela Borgia, cousin of the Duchess Lucrezia, but this maiden granted her preference to Guilio. The two brothers met by chance in the countryside. Guilio was alone and could do nothing when the Cardinal ordered his servants to seize Guilio and kill him. This cruel order wasn’t carried out, but Guilio was beaten until he bled, and lost the use of one eye.
From that moment Guilio began to plot against Ippolito and against Alfonso I. To succeed, he joined forces with another brother, Ferrante. The conspiracy was soon discovered, and the two princes were condemned to life imprisonment. It was 1506 when the two were shut up in the castle prison. Ferrante died there, but Guilio survived long enough to see the light of freedom again in 1559, thanks to Alfonso II. He’d reached the age of 81 years, of which 53 had been spent under lock and key. 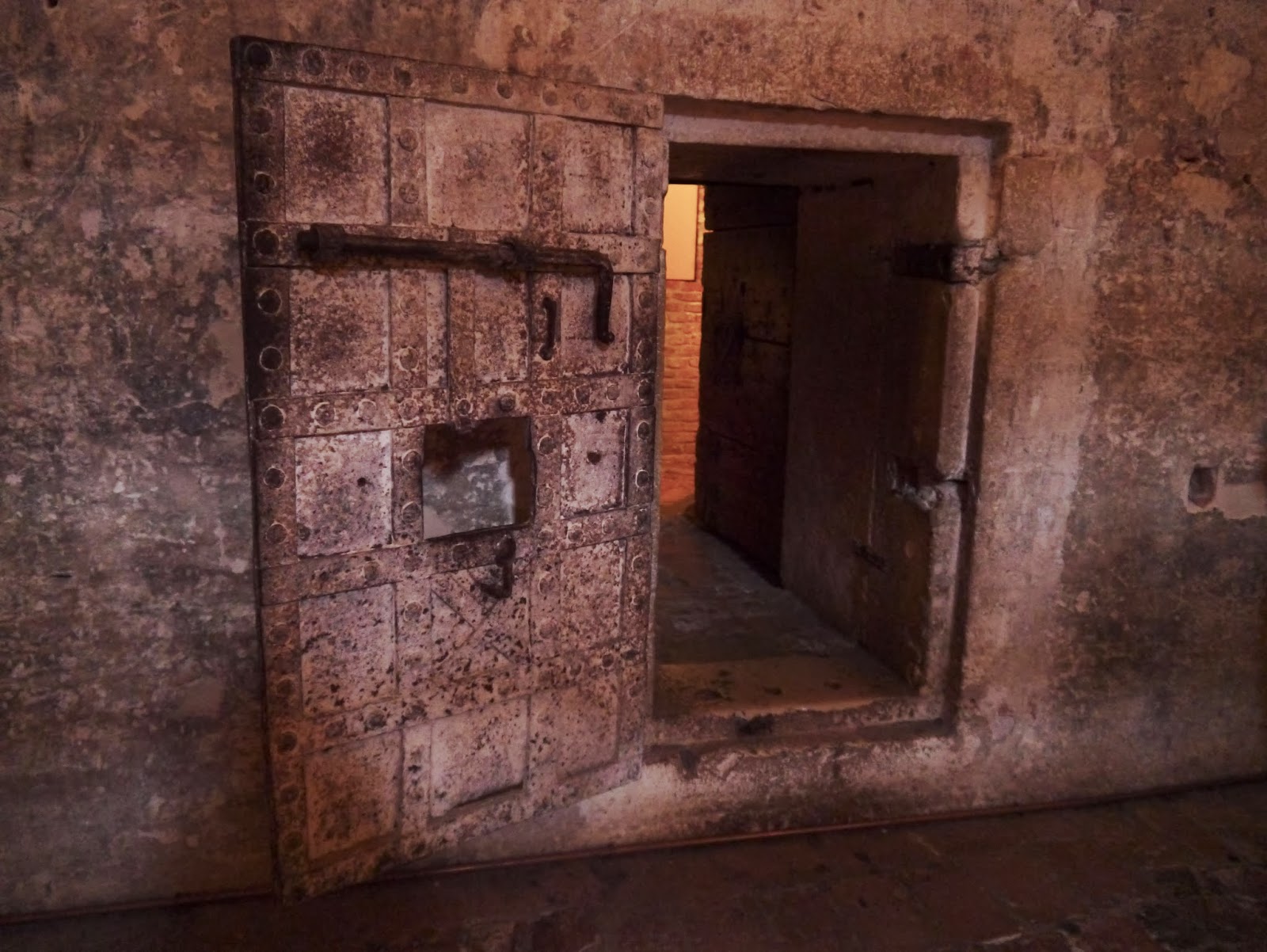 Like to hear another one, just to make sure the goosebumps rise when you’re underground in Castello Estense?


Parisina Malatesta was the second wife of Marquis Niccolò III, who was older than her. She ended up falling in love with her stepson Ugo, sone of the Marquis and Stella dei Tolomei, and he with her. The two young people were discovered, subjected to a rapid trial and finally beheaded. It was 1425; Parisina was 20 years old; Ugo still only 19. 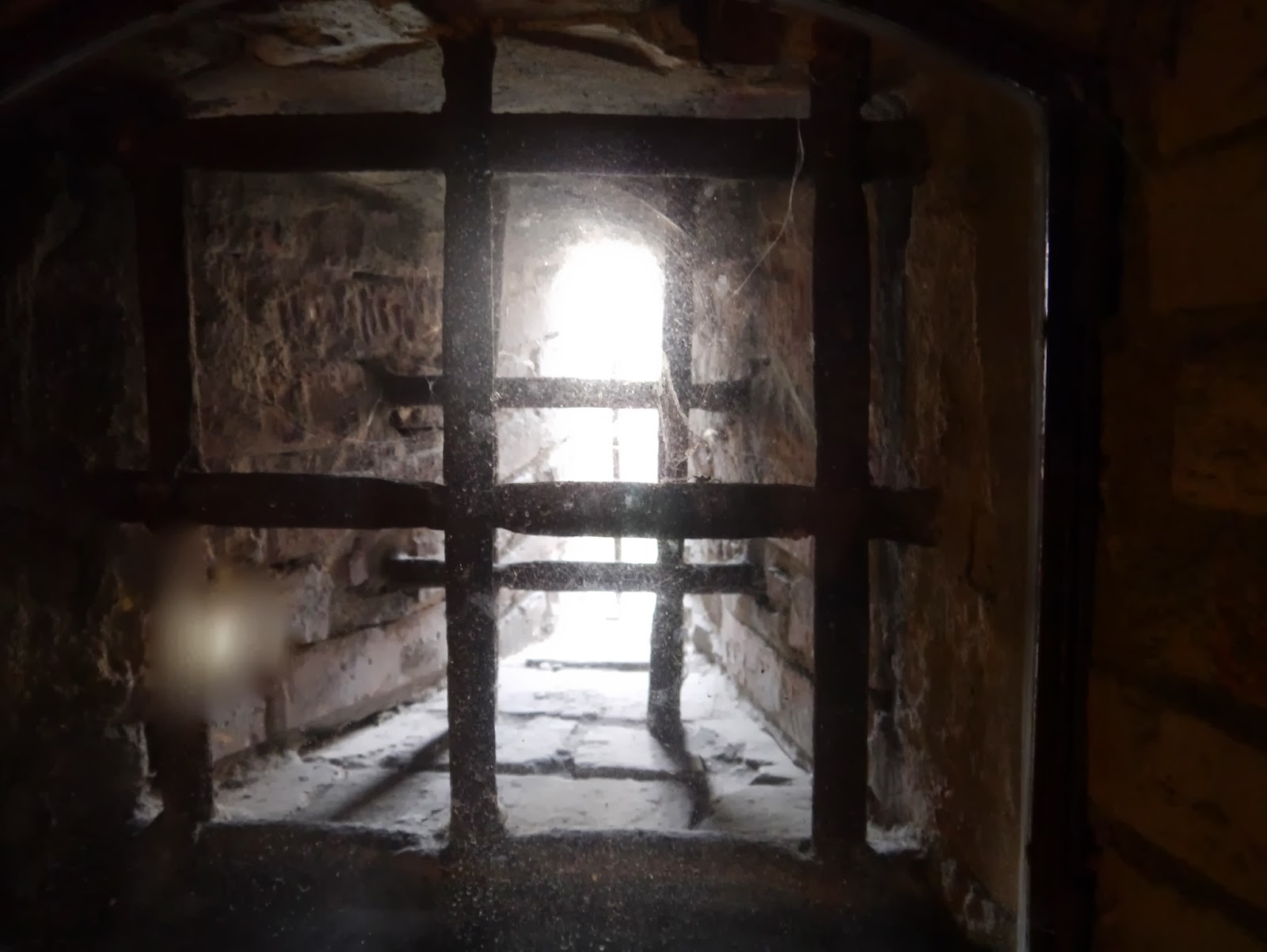 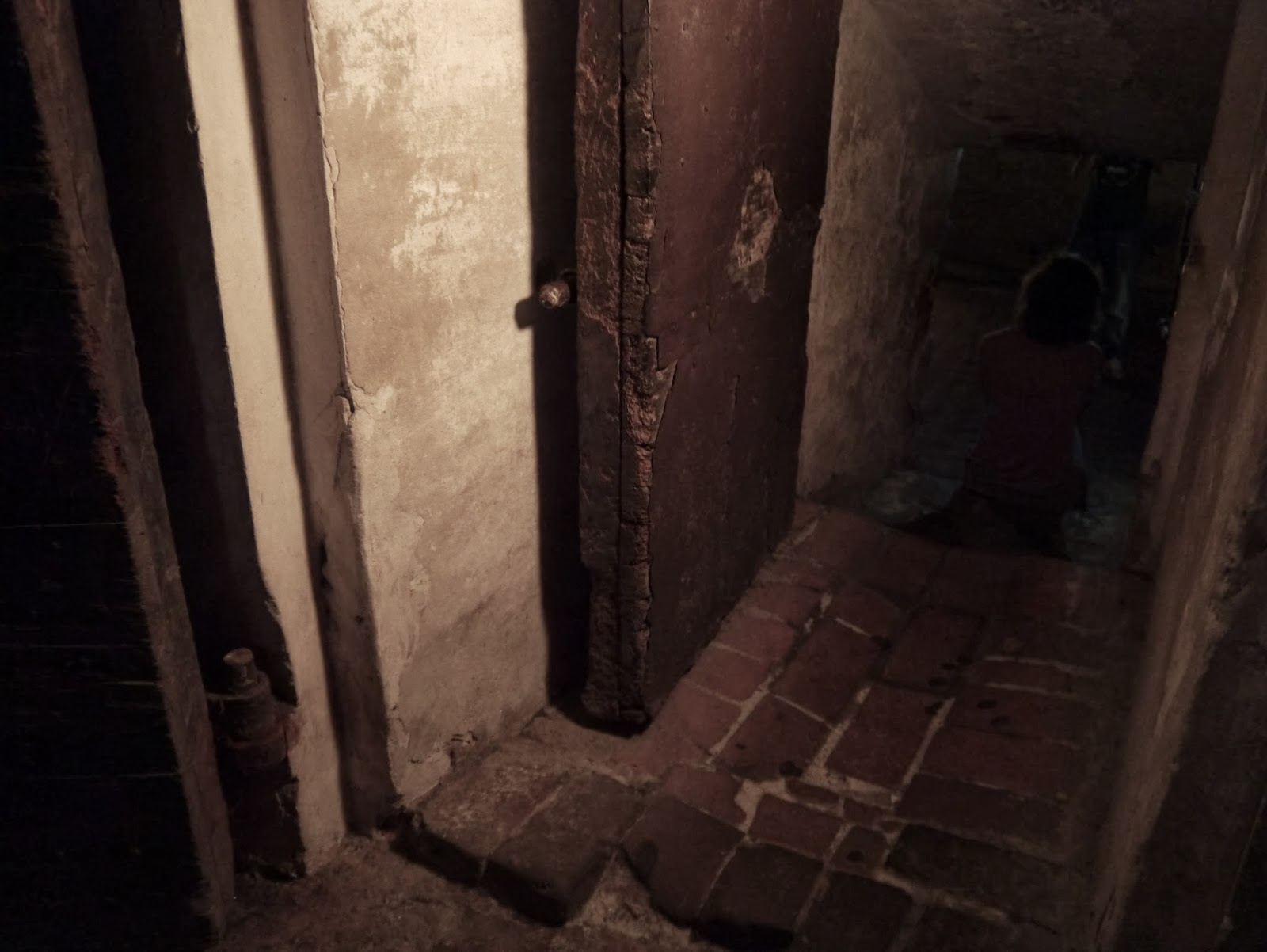 In May 1385 the people of Ferrara were restless, being burdened with taxes and subject to flooding on the Po River plain. Niccolò tried to calm their riotous mood, but in the end he gave the crowd the man they were calling for, an official they held responsible for their situation. He was promptly torn to shreds. The incident convinced Niccolò that he needed an impregnable fortress, and he had the architect Bartolino da Novara design the castle, which adapted an existing tower, the Torre dei Leone, and added three others. As the defensive character of the castle became less important, architectural transformations were made, and the exterior of the castle looks today more or less as designed by Girolamo da Carpi in the reign of Ercole II. The interior has been remodelled numerous times. After the Unification of Italy in the mid 9th century, the Castle was acquired by the Province of Ferrara, which still holds it. 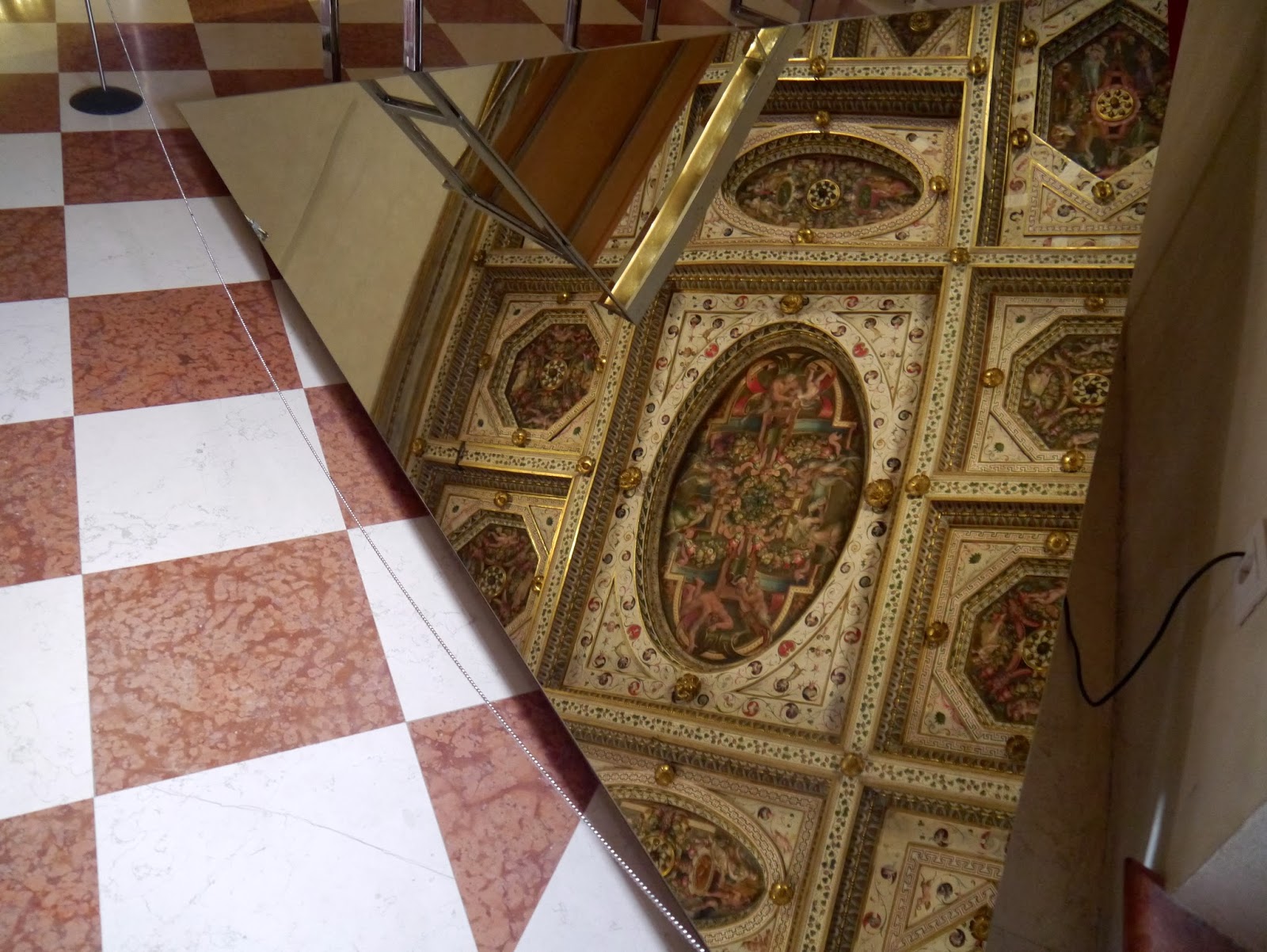 Note: Most of this information, and the stories, are from the small guidebook sold at the castle, "Castello Estense: A trip into history", produced by the City of Ferrara.