The difference between ‘comedy’ and ‘farce’? According to my programme for ‘'A Flea In Her Ear', a French farce written by George Feydeau in 1900, comedy is based mostly on characters and dialogue, while farce relies on plot and physical action. Farce is said to be much more difficult to write and perform than comedy, and relies on split second timing. Says programme-article writer John Morrison:
“Surrounded by slamming doors, plates of sardines and multiple burglars...I realised that performing farce demands a split-second precision that makes every other form of drama seem a piece of cake.”
I took myself off to The Old Vic Theatre just in time to catch the second-last performance of this farce – and luckily I did, because it was extremely funny, and brilliantly performed. Friends had recommended it to me, and I should have listened to them sooner.
So let me take you back to La Belle Époque, the years between 1890 and 1914, when Paris flourished as the artistic capital of the Western world. Lots of new technologies enlivened life, like bicycles for everyone, typewriters, internal combustion engines, new heating and lighting, telephones – and the Paris Metro opening in 1900. Also in 1900 the Exposition Universelle unveiled the still-to-be completed Eiffel Tower. Half a million Parisians attended the theatre at least once a week. There were 27,000 cafes, cabarets like the Chat Noir, and dance halls like the Moulin Rouge. All this encouraged some risqué on-stage entertainments, but there was also the emergence of Art Nouveau and the screening of the first motion picture by the Lumière Brothers. Ah, the fin de siècle!
Sitting at his permanent table reserved at Maxim’s restaurant was the playwright Georges Feydeau, observing Parisian society with a satiric eye, especially its sexual and matrimonial activities, its foibles and its extravagances.
Feydeau’s play ‘La puce à l’oreille’ (‘A Flea in her Ear’) didn’t make it to Britain until 1917, and only then in a highly sanitised version. Feydeau’s house of ill repute became The Blue Cat Tea Rooms, and the unfortunate impotence of the lead character Chandebise was changed to a long list of other ailments, including pimples and rheumatism. Then in 1965 the wonderful John Mortimer (of ‘Rumpole Of The Bailey’ fame) produced a more faithful translation – the one performed at The Old Vic  – and it was submitted to the Lord Chamberlain’s office, aka the British censors. As the programme notes put it, in 1965 “censorship was already on its last legs, but still vigilant.” However, the Mortimer translation passed the test – the “No Sex Please, We’re British” policy was dead and buried.
Feydeau is known as a bold and precise playwright, and his influence is said to extend to ‘Fawlty Towers’, where Sybil Fawlty is a classic example of the person who must be prevented from seeing what is really happening, a character which is a staple of good farce. In my opinion, anything which inspired ‘Fawlty Towers’ can only be good.

And the plot? I couldn’t possibly do it justice. It is too filled with characters (one actor plays two parts, with his identical looks causing mayhem), plots and subplots, mistaken identities, plans gone awry and various pairings up...and yes, there is plenty of slamming doors, physical running and leaping, some extremely funny moments arising solely from the contortions of plot. Almost everyone on stage was excellent, but commendation has to go to Tom Hollander – as the poster out the front of the theatre said, he was so good, they cast him twice. He played the dual roles of Victor Emmanuel Chandebise and Poche, making so many quick costume changes that it was a wonder he didn’t mix them up. At one point he even meets himself, which is quite a staging challenge, I think you will agree. Everyone did a lot of shrieking and talking very fast, and one chap did most of his part with a serious speech impediment (which is not an easy thing to get laughs out of).
But my personal favourite was probably Carlos Homenides de Histangua, played by John Marquez – a fiery Spanish husband with a revolver, a temper and Cuban heels. And a very funny accent. The play included a bevy of typecast Europeans - Spanish, French, German (“Prussian’) and English: whether these characterisations can be laid at the door of Feydeau, Mortimer or the present company and director is not quite clear. I hasten to add that everyone laughed at all of them. Histangua was quite endearing, really, with his histrionics and his pistols, and his fandangos to hide the noise in the next room. His wife, Lucienne, soothed him with a rapid-fire Spanish explanation, to which he replied ‘es verdad? es verdad?’, and the heroine Raymonde sighed, ‘how quickly people can become reconciled in Spanish’.
The first half ended with an enormous contretemps in the ill-famed Hotel Coq d’Or, half-dressed people running everywhere, Histangua waving his revolver, and everyone (plus some extras) on stage simultaneously. It was wild, I tell you, wild. The shorter second half (if you’ll excuse the literal incorrectness of that phrase) resolved all the plot lines and loose ends at a rapid pace. You had to keep up. I’ve never known a plot to move so quickly and with such precision. It was very clever indeed, and very funny. Laugh-out-loud funny, which is a blessing not to be lightly dismissed.

As some in the cast described it: "it's like getting on an express train"; "like an episode of Benny Hill drawn by Salvador Dali"; '"you just have to hold your nose and jump in."
Thank goodness I caught it in time. 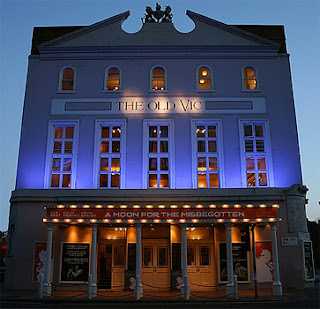 It was the first time I had been to The Old Vic (there are so many theatres in London, that nearly everything I go to is in a theatre new to me!) Its history goes back to 1818, right in the middle of the Regency Period, when it was known as the Royal Coburg. The street it is on, very close to Waterloo Station, is called The Cut (for reasons which I have not unearthed), and the theatre was sometimes called The New Cut. It went through several names, including ‘The New Victoria’ and ‘The Royal Victoria Coffee House and Music Hall’. People appear to have started calling it ‘The Old Vic’ by the 1920s. The major figures in running the theatre at its height were women, Emma Cons and her niece Lilian Baylis. Many big names played there, from Edmund Kean in the 1830s (he thought the audience “a set of ignorant, unmitigated brutes”), to Sybil Thorndike carrying on bravely during WWI Zeppelin raids, to John Gielgud playing Shakespeare. Peggy Ashcroft, Michael Redgrave, Laurence Olivier – all the big names seem to have been in The Old Vic company.
The building was badly bombed in the Blitz, causing the establishment of a temporary home known as The New Vic. The theatre re-opened in 1950 and went on to boast many more big name players: Richard Burton, Judi Dench, Maggie Smith. This company (very illustrious) seems to have formed the nucleus of the National Theatre, which moved off to its home in South Bank in 1976. The poor Old Vic then led an itinerant life, and was eventually bought in 1982 by a Canadian businessman who restored its facade to its former glory based on an 1830s engraving, and the auditorium using 1871 designs. All’s well until the Canadians  put the theatre on the market in 1998, and there are suggestions to turn it into a themed pub, a bingo hall or a lap-dancing club. *Cue wide-spread outrage and protests* A Trust is set up to buy and operate the theatre in 2000  --- and here we are today. In 2003 Kevin Spacey was appointed first Artistic Director of The Old Vic Theatre Company . He’s coming onstage to play Richard III in June – I have my ticket.