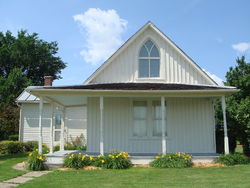 The painting is entitled "American Gothic" and has become an icon of American art, as well as an icon of Americanism. The reference to ‘Gothic’ alludes to the architecture of the house before which the two figures are posed, particularly the arched ‘church’ window. The house existed - in fact, still exists [in the town of Eldon, Iowa - it's known as The Dibble House]. The artist Grant Wood is said to have come across it during a drive in 1930. He thought the use of such an arched window in a simple, flimsy frame house was absurd - which it is, of course. The artist said that he wanted to paint a picture of the kind of people he imagined would live in such a house.

The painting has also come to symbolize and embodiment of the so-called ‘American spirit’ of simplicity, hard-work, piety and seriousness -- though in modern America one might be forgiven for wondering at the extraction of those particular virtues as symbols of the American spirit. However, no doubt such qualities were needed, useful and apparent amongst the early farming pioneers. The picture has a solid, plain, serious quality to it, with the curves of the pitchfork reflected in the stitching on the farmer’s overalls (where you can also see the artist’s signature); the steep roof, closed curtains and incongruous arched window of the house in the background. The man holds his implement of work and the woman has behind her shoulder some small signs of domesticity - flower pots on the house steps.

The two models were the artist’s sister and their dentist. These days the figures are usually described as a farmer and his spinster daughter. They could, of course, just as easily be a married couple. It’s said that the artist’s sister was rather appalled at the thought of herself being considered the wife of such an older man, and it was she who spread the interpretation of ‘farmer and daughter’.

The image has also become one of the most-parodied American art works. 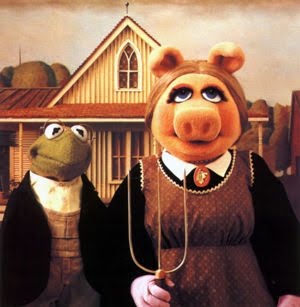 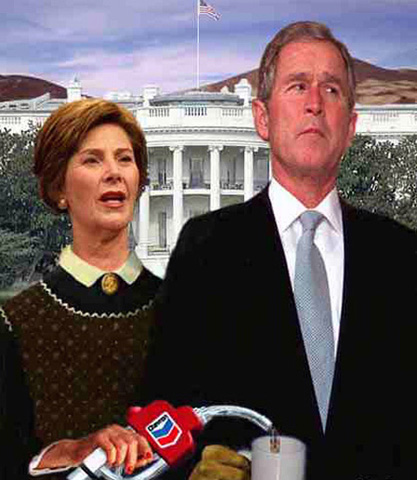 Also in the Art Institute of Chicago, in fact in the room next door, is another great icon of American art - Edward Hopper’s “Nighthawks” 1942, a stunning and evocative scene of loneliness: a lighted diner in an empty street, three customers and a waiter seen sitting in the yellow interior light through the curved plate glass of the window. Like “American Gothic” the picture has a quality of stillness, solidity, and lack of cheer -- even though the diner customers (especially the woman in red) seem happy enough, they are alone in a rather bleak and decidedly empty streetscape. There's no visible exit door in the diner.


Edward Hopper said that Nighthawks was inspired by "a restaurant on New York's Greenwich Avenue where two streets meet," but the image, with its carefully constructed composition and lack of narrative, has a timeless quality that transcends its particular locale. One of the best-known images of 20th-century art, the painting depicts an all-night diner in which three customers, all lost in their own thoughts, have congregated. Fluorescent lights had just come into use in the early 1940s, and the all-night diner emits an eerie glow, like a beacon on the dark street corner. Hopper eliminated any reference to an entrance, and the viewer, drawn to the light, is shut out from the scene by a seamless wedge of glass. The four anonymous and uncommunicative night owls seem as separate and remote from the viewer as they are from one another.


Both paintings are beautiful and evocative, and deservedly admired.

Just in case you wondered if the Art Institute of Chicago houses any other treasures - the answer is a decided YES! Here's just a handful from their extensive collection of Impressionists and European art: