Tea with Edie and Fitz

Following a very English theatre experience in London, a recent quick round of theatre in the USA turned out - of course - to be a very American experience. 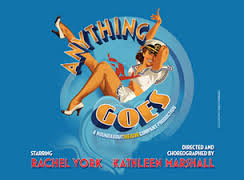 'Anything Goes' must qualify as one of the classic American musicals - all those Cole Porter songs, high kicks, tap dancing, broad accents and clever, if dubious, lyrics...’If baby, I’m the bottom, you’re the tops!’ This despite the fact that it’s based on a book by that redoubtable Englishman, P G Wodehouse. Although not a frequenter of musicals, I blushingly admit to a weakness for Cole Porter - ‘It’s delightful, it’s de-lovely!’

The production I saw in Chicago seemed the perfect sort of show for the ornate marble gilded-age-style Cadillac Palace Theatre. Once I got over the over-the-top foyer and snuggled into my plush seat I enjoyed my night at the show. I’d seen this one before, years ago in Sydney, and knew and loved all the songs -- a recipe for enjoyment at a musical. One or two of the cast could perhaps have been better chosen, but our ‘Roxy’ (Rachel York) was pretty good, and they were all certainly excellent dancers.
Three stars. 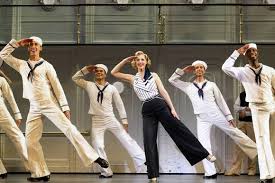 
‘Tea with Edie and Fitz’


A complete change of pace was provided by a new play by Adam Pasen at the small Greenhouse Theatre in Chicago, performed for me and only about ten other people. It deserved more attention. I enjoyed ‘Tea with Edie and Fitz’ very much, but then I’m a book nerd and the thing is replete with literary reference. It concerns a meeting between two of the giants of American literature, Edith Wharton and F Scott Fitzgerald, and is set in 1925. Such a meeting did take place, and afterwards they never spoke again (despite sharing an publisher). The play imagines the meeting, and includes the disintegrating Zelda, wife of Fitz, and the ghost of henry James, friend and mentor of Edith. There were rather too many characters and the structure was a little complex, but I enjoyed it.

This was the play’s first professional production and I was there on opening night. It was ambitious, well acted and beautifully designed. One of our little band of ten in the audience was clearly a reviewer. I think I’ve found her review here.

Here’s another, a little less admiring:


“Edie and Fitz did indeed meet once for tea in summer 1925. That event provides Pasen with an excuse to serve up a groaning board of literary references and biographical details”

I’d give this play four stars, and hope to see it tighten up a little and make the big time.

To round out the full American experience, what could be more local than a Broadway play about a New York newsroom in the 1980s, written by Nora Ephron and starring Tom Hanks? As the noosroom boys would say, ‘f*** yeah!* 'Lucky Guy' is a great show - with those kind of names involved, you’d expect so. It’s the story of the life and career of a tabloid journalist, Mike MacAlary. The stringing together of the event is handled by the actors talking directly to the audience, rather than relying on an acted storyline. It does sound a bit like a collection of anecdotes, but in the end it works, not least because the direction of George C. Wolfe is so good, especially in the first half where he captures the wild days of the ‘80s in New York. And what’s not to like about Tom Hanks? Fab. Four stars. 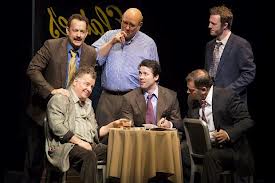 Posted by Annette Freeman at 9:44 AM