There’s a book on my bookshelf entitled ‘The Wreck of Western Culture - Humanism Revisited’ by John Carroll, an Australian professor of sociology. I read it some years ago, and was entranced by a discussion in Chapter Two about an equestrian statue that stands in Padua, in front of San Antonio’s Basilica. The statue was made by Donatello around 1447. In art history terms, it’s an early example of Renaissance statuary. The prof uses it as a kind of metaphor or example of a profound change of thinking that signalled the rise of humanism in western Europe.

What’s so entrancing about the statue? I’ve never been entirely sure, but when I found myself in the vicinity of Padua I just had to go and find it...despite the grey rainy day...

The statue is called ‘Il Gattamelata’, which was the nickname of the gentleman it depicts mounted on his horse - he was a 14th century condottiere, or mercenary. I’ll let Professor Carroll explain its significance a little more:

“For over five hundred years now, the small square in front of the cathedral of San Antonio in Padua has worshipped a different god than he who rules inside the church doors, where one plunges into the dark. There is awe in the square, open to the heavens. To come in sight of it - and it is best to do so at noon in the full light of day, and to lift the eyes and look - from that moment on, one is in the thrall of humanism. True, it is possible to sidle up to the cathedral with head lowered, the first signs being the stalls for tourists and pilgrims selling plastic knick-knacks, garish red charms and crudely painted virgins, all the paraphernalia of modern Italian Catholicism. They can crowd out the square.

What does command here, set on a high and massive stone pedestal, is the Gattamelata. He is the Venetian general Erasmo de Narni, on horseback, immortalised in bronze a few years after his death in 1443, by Donatello. His form is that of the medieval condottiere, the warrior who by means of his own singular, brute strength and courage could win any war. The condottiere was the hero of the earlier epoch, one embodying subhuman fantasies of the monstrous force of animal nature, at times subliminated into the chivalrous ideal of the Christian knight. The most brilliant representation of the medieval condottiere stands fewer than thirty miles from Padua, in the Campo of saints Giovanni and Paolo in Venice - that is, Verrocchio’s equestrian statue of Il Colleoni. A mountain of a man, rearing up in his stirrups, Il Colleoni thrusts his massive torso and neck, his thick and crude features glowering from under a steel helmet like those of an enraged beast. He is a hulk of indomitable power.

The Gattamelata is mounted on a strong, square warhorse, formidably serviceable, with stocky legs, the neck and chest of a bull, and a fierce head. This charger has the attributes that Verrocchio was to give his warrior. The Gattamelata himself is the epitome of balance, and confidence of a different order - its source is inward. He sits lightly in the saddle, his posture straight and relaxed. he looks ahead, without helmet. In his right hand, which is forward over the horse’s mane, he delicately holds a baton. Whereas his charger strives, he is composed. Donatello underscores the point by making the rider proportionately smaller in relation to the bulk of his horse. The human individual is master of powerful forces surging beneath him: they champ, they pull, they are vastly stronger yet, through his own will, his own force of character, nothing to do with physical strength only to do with balance, and a clear and concentrated mind, he is master. The baton is also suggestive of a scroll, symbol of knowledge, of the rational human mind conquering the volcanic chaos of nature. The Gattamelata is renaissance man.

He has nothing to obey but himself; he needs nothing above or beyond the I. he is the value-creating individual - on the move. There is such intensity focused between the brows, such inviolable purpose buried in the eyes, that the head itself, bare to the heavens, becomes the sacred site. A concentrated mind may move the very earth.

Humanism, nevertheless, needed an ethic, a central moral axiom, to secure its foundation. The clarity and steady vision with which the Gattamelata looks straight ahead, taking in the world, is not enough. Neither is his commanding will. He is so superbly in form because he embodies the humanist ethos. He does obey one external - he is a gentleman, or in the Italian characterisation of Castiglione, a courtier. And, as a gentleman, he is under the command of honour...The principal role of the humanist hero was...to become so awesomely noble that the rest of common humanity would believe in the culture he exemplified.

The ease and grace of the Gattamelata is predicated on the knowledge that he is right, doing what he has to do...Donatello’s...vision is different. he saw the concentrated, essential value, and stripped away the rest. What remains is the grace of pure form. The Gattamelata on a bright noon is an exhilarating tribute to the human individual. It’s message is, ‘I like him!’ "

And you thought it was just a statue of a man on a horse. 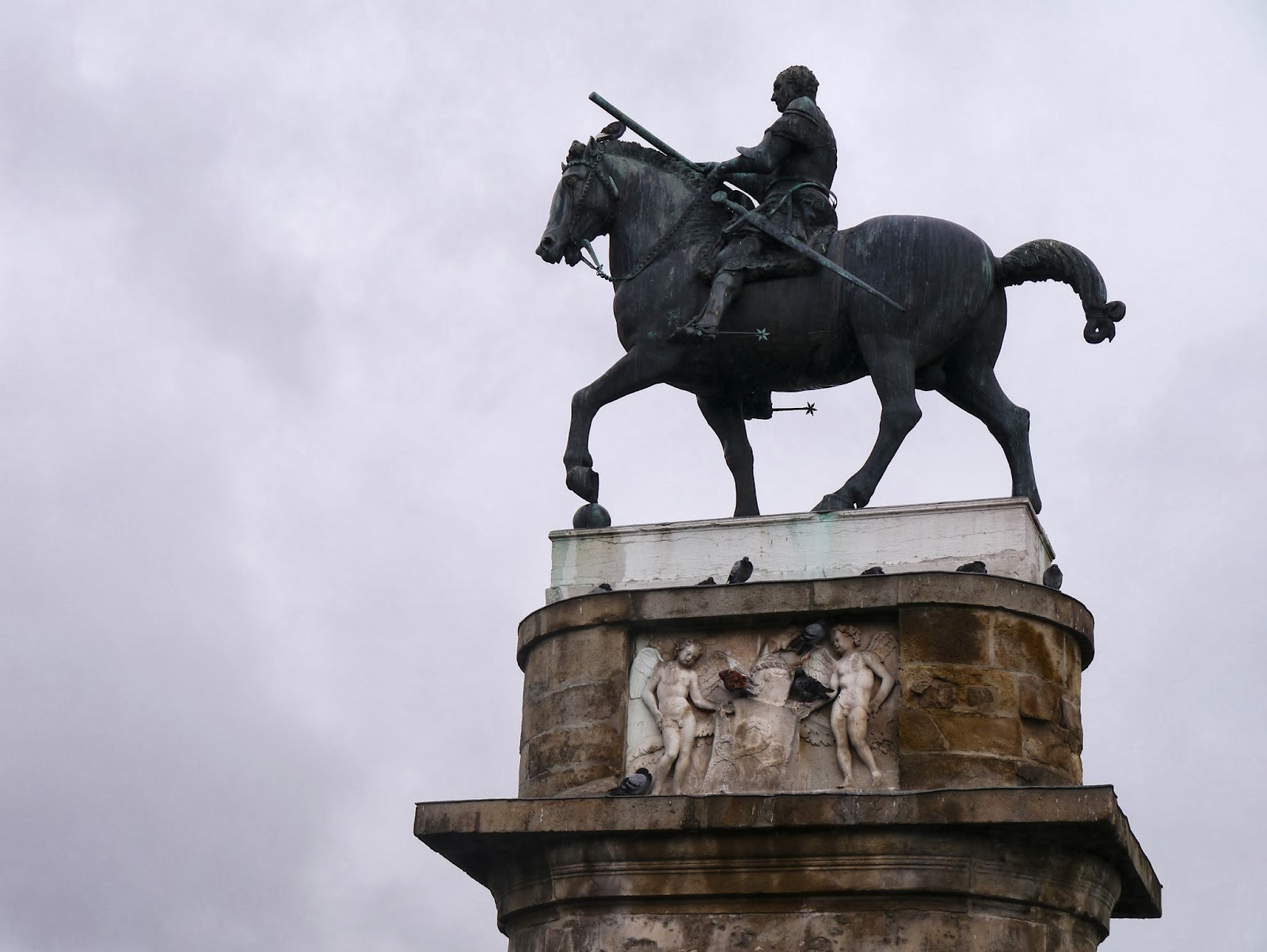 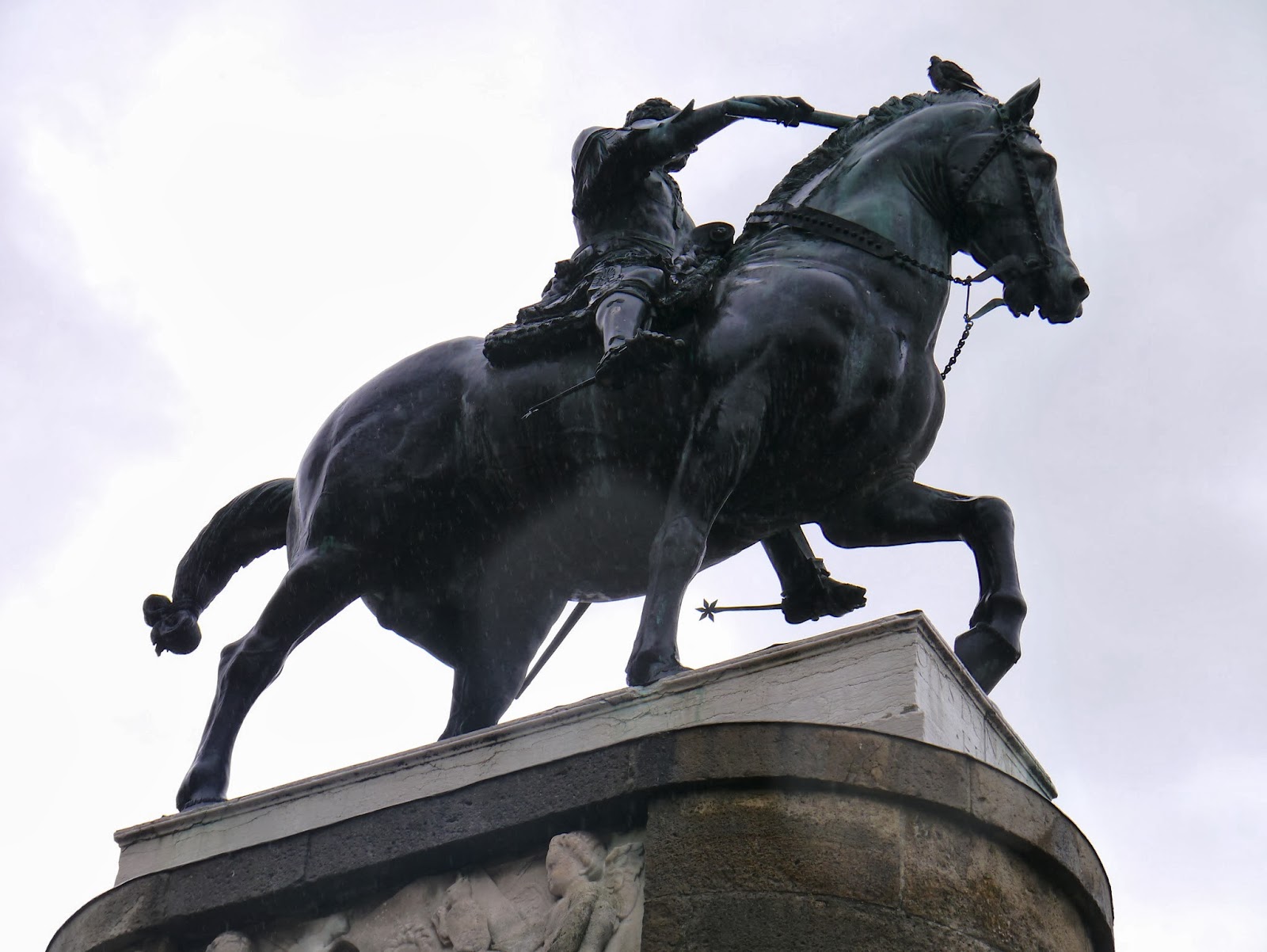 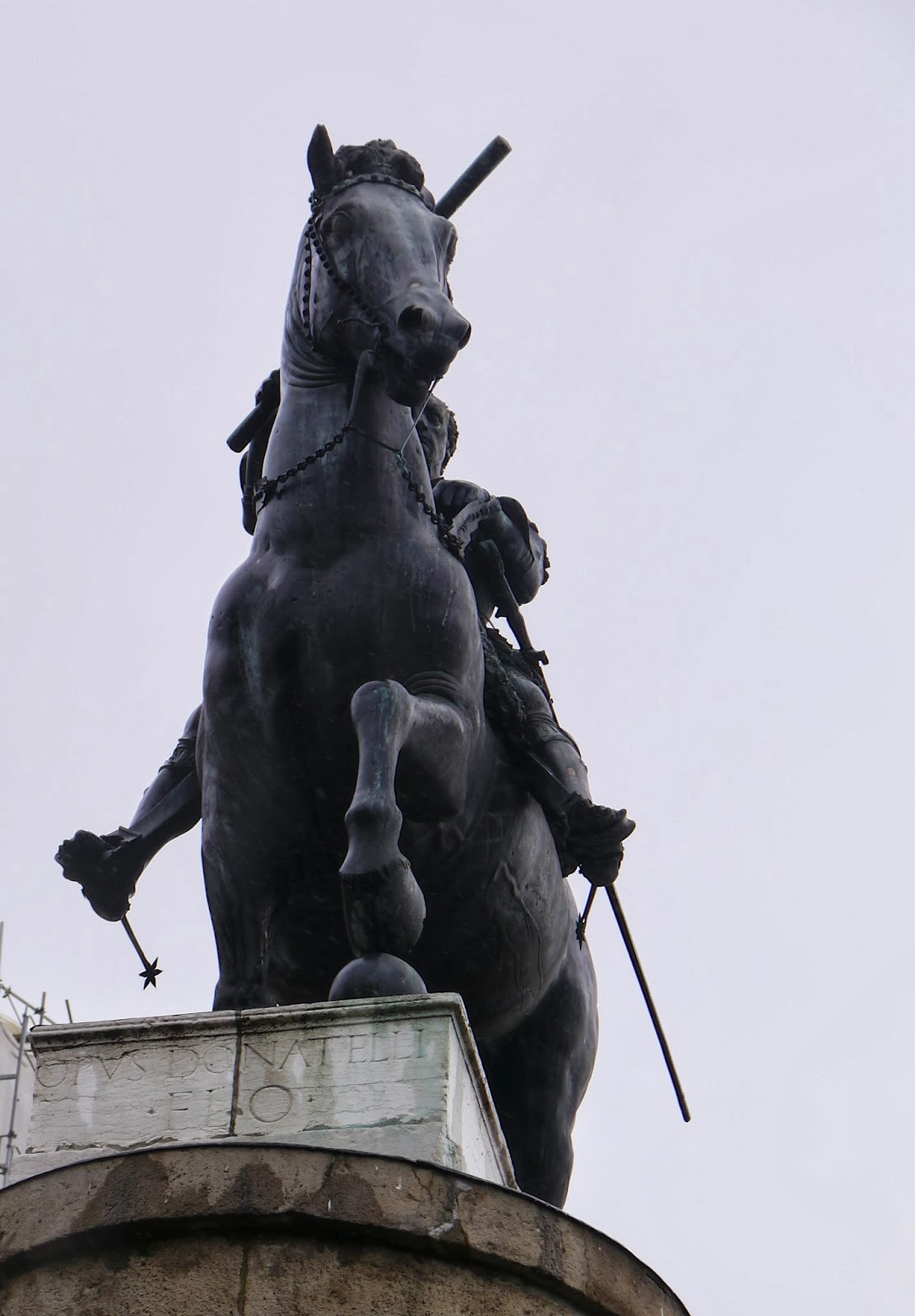 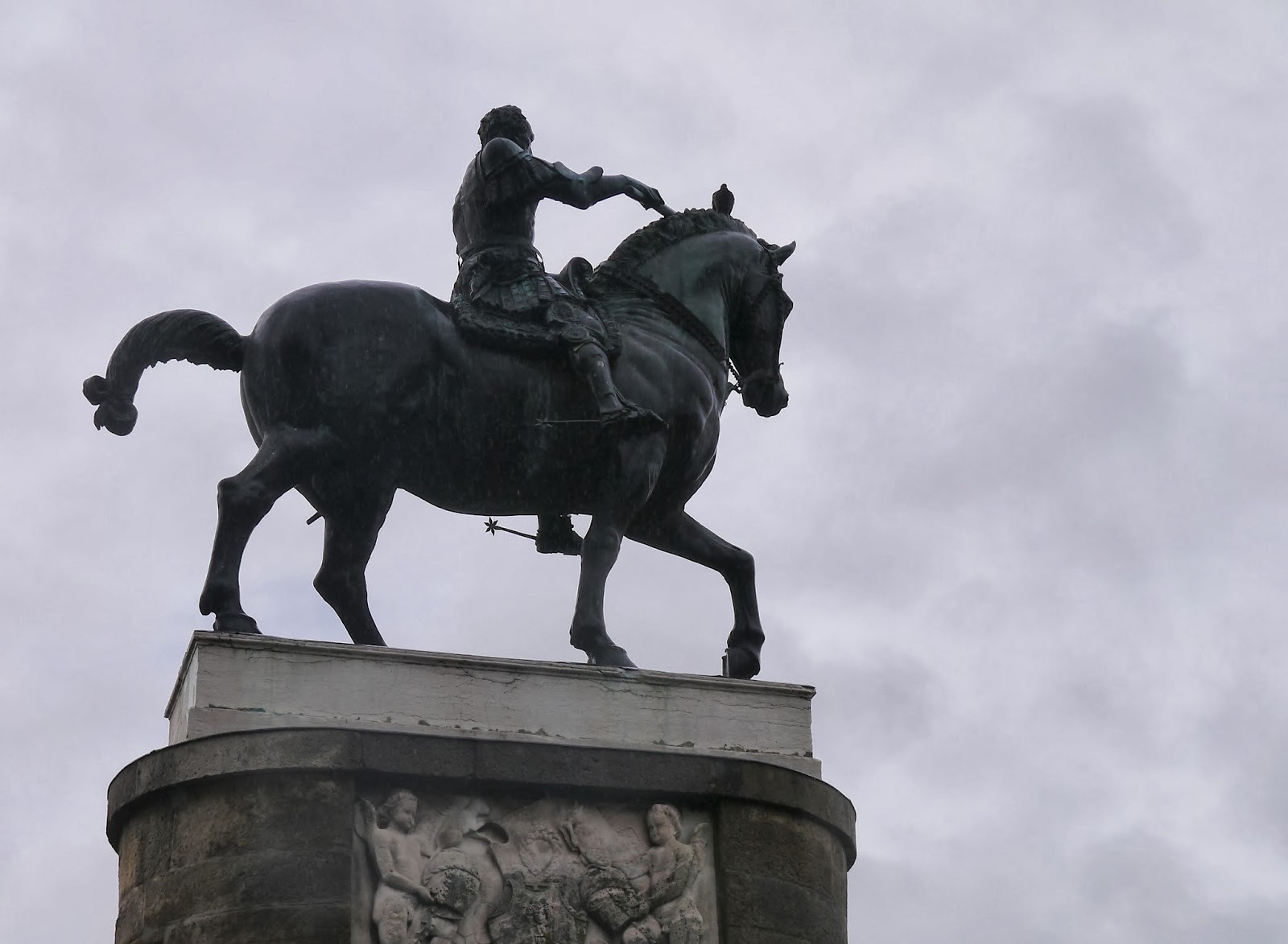 Posted by Annette Freeman at 11:13 AM