This blog’s review of Roman Catholic saints has covered the lesser-known as well as the some famous figures. Today we visit with one of the Big Names, Saint Anthony of Padua. And along with the saint’s big name, is his BIG basilica, in Padua (or Padova, as it’s known in Italian). The Basilica, often called simply ‘Il Santo’, was declared an international shrine by Pope John Paul II in 1993:

“Of all the shrines in the world, the basilica dedicated to Saint Anthony, as proved over the centuries, is of special importance. As everybody knows, it holds the body of the great teacher and miracle worker; millions of people come in pilgrimage from all over Italy, Europe and the world...”

On my visit, on an ordinary rainy Monday in September, the Basilica’s facade was shrouded in scaffolding (Italy is under perpetual restoration), the vendors of religious trinkets huddled under the dripping awnings of their carts in the courtyard outside. Inside, troupes of pilgrims queued to walk reverently around the large white chapel in the centre of which sits the sarcophagus holding the saint’s body. It’s traditional for the pilgrims to spend some time with their palms flat on the surface of the tomb, their foreheads resting on it was they make their silent prayers; perhaps they kiss it. The tomb is surrounded with small photographs and tributes to the saint from those who’s prayers have been answered.

The Basilica, which is run by the Friars Minor Conventual, helpfully provides small slips of paper and pencils so that you can write down your request to the saint and leave it with him, to mull over and weigh the merits of your request.

As the basilica info says: “When you go to the tomb of St Anthony you have so much to say. Once there, you can’t say it all, because there is not enough time. You want to leave something of yourself there, in order to lengthen that dialogue which was interrupted too soon.”

You can pick up a small postcard on you way out of the basilica, and mail it in, too. Or - and here’s something they didn’t think of in the 13th century when the church was built - you can email! dearsaintanthony@mess-s-antonio.it Amazing!

The Art in the Basilica

Once you’ve visited the strangely glowing white chapel of the saint, the Basilica contains other things of interest. First amongst these must be the beautiful bronze statues on the high altar, created by Donatello in 1444 - 45, in the early Renaissance period. There are frescos from as early at the 1300s; and the saint’s chapel was renovated in the 1500s by Renaissance artists including Andrea Briosco. The main artistic feature of the chapel are large bas-reliefs carved on the walls between 1505 and 1577, illustrating - rather vaguely - scenes from the saint’s life. The sculptors’ name are carved on most of them, perhaps the most prominent being Jacopo Sansovino. The Rough Guide describes them as “the most important series of relief sculptures created in sixteenth century Italy.”


Behind the altar are small side chapels, one holding a reliquary with a curious relic of the saint: his tongue and vocal chords, which are said to be ‘immaculate’ (i.e. perfectly preserved). The ornate Baroque chapel was closed behind great golden gates the day I was there, so I can’t give you more specific information about this curious item; except to say that since San Antonio’s principal claim to fame was his extraordinary skill as an orator, the preservation of his tongue seems apt.

Building of the Basilica was famously begun very quickly after the saint’s death, since he was canonised in speedy time. He died (quietly in his bed, unusually) on 13th June 1231. Only eleven months after his death, on 30 May 1232, he was declared a saint by Pope Gregory IX. Work began right away on the Basilica to house his tomb, though it wasn’t ready for that role until the start of the 14th century.

The Story of Saint Anthony

So who is Saint Anthony?  Believe it or not, he was a Portuguese named Ferdinand, and an Augustinian who swapped to the Franciscans (the present Pope’s favourite saint). I quote from the Basilica information brochure:

“He was born in Lisbon, Portugal in 1195, to a noble family, and was named Ferdinand. In 1210, he entered the Augustinian Order in Lisbon, and in 1212, he was sent to Coimbra. In 1220, just after being ordained, he meets the first Franciscans from Assisi and is fascinated by them. In Morocco, five of them are martyred and their remains brought back to Coimbra. This fact shakes Ferdinand who leaves the Augustinians to become Franciscan, changing his name to Anthony.” [the emphasis is the Basilica’s]

The newly re-named Anthony went looking for adventure and glory. The story ranges across the 13th century Mediterranean world and he meets a celebrity:

“He goes to Morocco and looks for martyrdom, but immediately becomes ill. In the spring of 1221, he decides to return to Portugal, but a hurricane blows the ship of course, and he lands in Sicily. In May of that year, he goes to Assisi for the “Chapter of the Mats”. There, he meets St Francis and listens to his admonitions. After the Chapter, Friar Graziano, the Provincial of Romagna, takes Anthony back with him and sends him to the hermitage of Monte Paolo, near Forli, where he works and prays.”

Anthony makes a good impression and his career goes from strength to strength.

“In September 1222, at an ordination, Anthony manifests his great knowledge of Scripture to the Friars. From that moment on, he preaches and teaches theology to the Friars, under Francis’ authority. In 1225, he preaches in france. from 1227 to 1230, he is the Provincial for Northen Italy. In 1230, he preaches in the province of Treviso, and he writes his Sermones in Padua. In 1231 he preaches daily during Lent in Padua, hears confessions and says Mass. Having retired to Camposampiero to rest, he dies in Arcella on 13 June 1231.”

Wiki's take on Saint Anthony is here. He's the patron saint of finding things and lost people. Wiki tells that:


Various legends surround the death of Anthony. One holds that when he died, the children cried in the streets and that all the bells of the churches rang of their own accord. Another legend regards his tongue. Anthony is buried in a chapel within the large basilica built to honour him, where his tongue is displayed for veneration in a large reliquary. When his body was exhumed thirty years after his death, it was found to have returned to dust, but the tongue was claimed to have glistened and looked as if it was still alive and moist; apparently a further claim was made that this was a sign of his gift of preaching.

San Antonio os a very popular saint throughout the world. He's big in New York City, where a week of celebrations surrounds his Saint's Day (13th June). He's the patron saint of Padua (of course), and of many churches in Portugal, Spain, Brazil and throughout Europe. He's also big in Asia, particularly in South India:


In Uvari, in Tamil Nadu, India, the church of Saint Anthony is home to an ancient wooden statue that is said to have cured the entire crew of a Portuguese ship suffering from cholera.

San Antonio's iconography is a bit confused. Sometimes he's associated with a fish (because he once preached to fish, it seems). Sometimes his fervour as a preacher is represented with a flaming heart. He's often shown holding a white lily. But most often he's seen holding a small child - the Christ child. This came about through another key pattern which has him meditating on an open book in which the Christ Child himself appears (El Greco painted him this way in 1580). Over time the child came to be shown considerably larger than the book and some images even do without the book entirely.

San Antonio is a saint for all seasons. He’s a confidant and intercessor of the poor. He speaks - the Basilica Friars inform us - with whoever wishes to share in the sufferings of the body and spirit. It’s obvious that many are devoted to him:

“Saint Anthony is a travelling companion in daily life. His is not just the dispenser of grace and favours to whom we run when in need. He is the elder brother, the friend who is always there and willing to help those with problems big and small. the faithful ask him for light in their lives and for their life’s journey, They ask him to help those who are lost, to console those who suffer, to assist the poor and the forgotten. The faithful see St Anthony as an intercessor and protector.”

And now he’s on email. 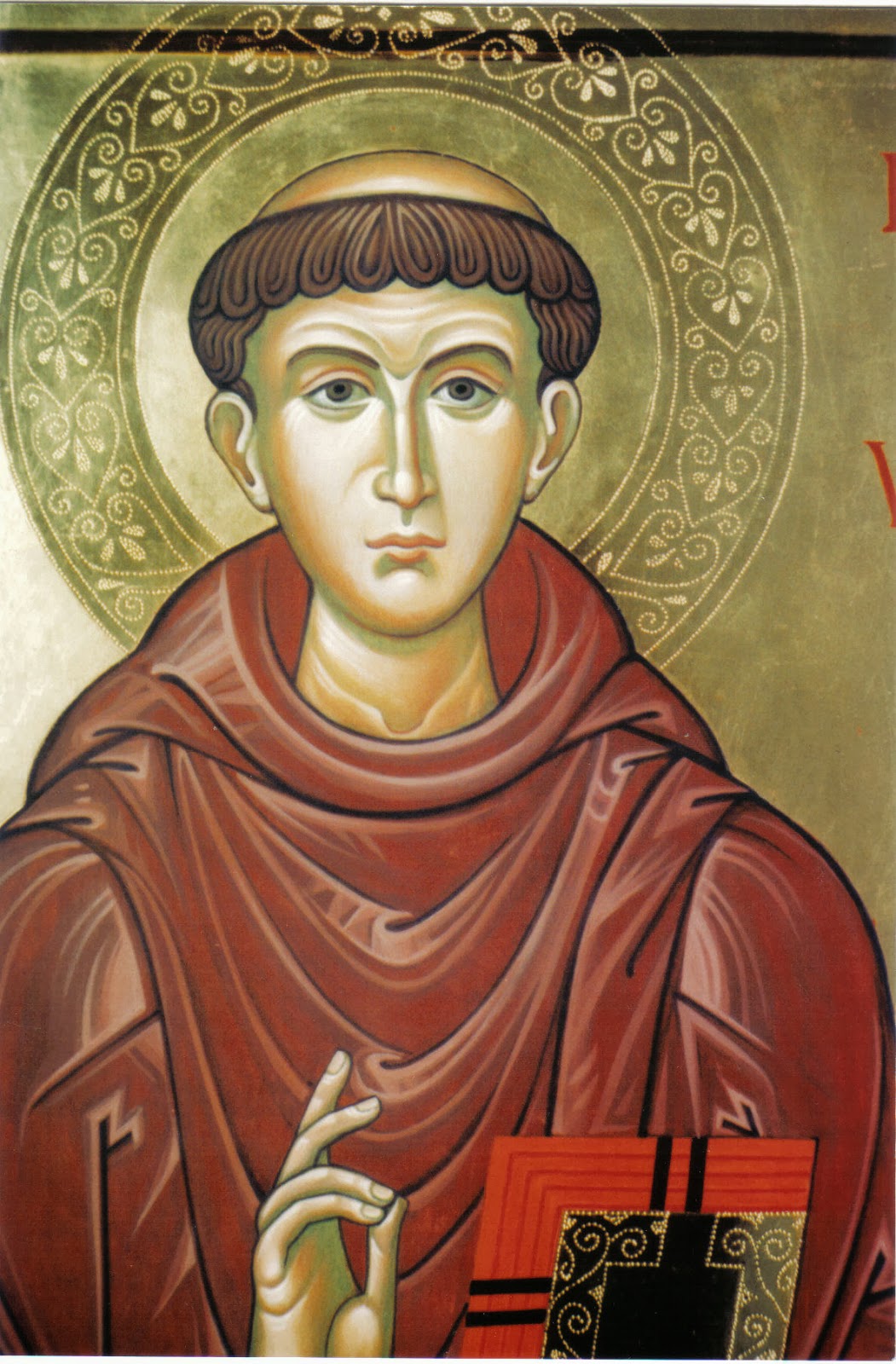 Posted by Annette Freeman at 7:46 AM