Lots of places hold biennales - two-yearly art festivals, showcasing the modern and progressive in all kinds of arts fields. This list from the International Association of Art Critics lists hundreds. But if I were to simply say 'the biennale', everyone would likely think of Venice. 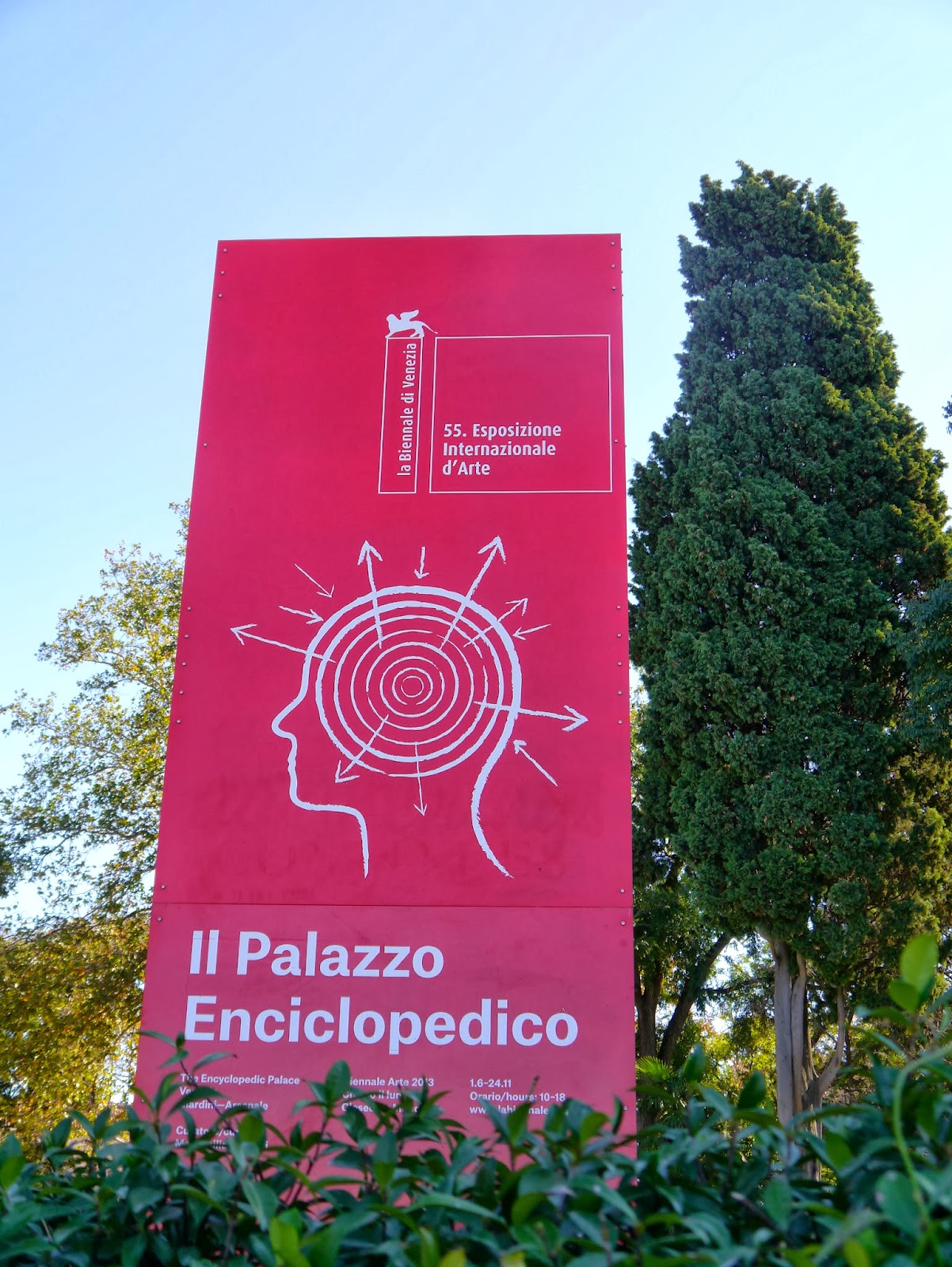 Founded in 1895, the Venice Biennale is the grandaddy of them all - though that's an inappropriate term for a event that prides itself on fostering and displaying the new, the avant-garde, the fresh and the undiscovered. La Biennale di Venezia today runs from June to November and covers art, architecture, cinema, dance, music and theatre. The art exhibition runs in 'odd' years and the architecture exhibition in 'even' years. (The 14th International Architecture Exhibition, directed by Rem Koolhaas, will run from Saturday 7th June to Sunday 23rd November 2014.)

The event is complex, enormous, geographically spread and historically deep. The two main venues are the gardens of the Giardini, where 29 individual country pavilions amongst the trees are used by a variety of nations to showcase their own art installations, and a grand 'Central Pavilion' houses anything and everything; and the Arsenale, an ex-industrial complex given over to room after room and building after building of contemporary art. Additionally, all over Venice itself, on its many islands, you'll find buildings hosting artists' displays, and contemporary installations looking chic amongst the crumbling grandeur of Venetian palazzos. You can hardly take a step - or rather, a boat ride - without coming up against yet more contemporary art.


The history of the Biennale seems to be entwined with politics - understandable, given the cutting-edge nature of the art it seeks to promote. It's not a venue for the sale of art (the artists troop off to Art Basel for that), but there must still be a lot of money behind it somewhere - Venice itself can't afford to install all that art.

Here's a little history from Wiki:

The first Biennale was held in 1895; during the first editions, decorative arts played an important role. The event became more and more international in the first decades of the 20th century: from 1907 on, several countries started installing national pavilions at the exhibition. After World War I, the Biennale showed increasing interest in innovative traditions in modern art. Between the two World Wars, many important modern artists had their work exhibited there.

In 1930, control of the Biennale passed from the Venice city council to the national Fascist government. In the 1930s, several new sections of the event were established: the Music Festival in 1930, the International Film Festival in 1932 and the Theatre Festival in 1934. From 1938, Grand Prizes were awarded in the art exhibition section.

After a six-year break during World War II, the Biennale was resumed in 1948 with renewed attention to avant-garde movements in European, and later worldwide, movements in contemporary art. Abstract expressionism was introduced in the 1950s, and the Biennale is credited with importing Pop Art into the canon of art history by awarding the top prize to Robert Rauschenberg in 1964. From 1948 to 1972, Italian architect Carlo Scarpa did a series of remarkable interventions in the Biennales' exhibition spaces.

The protests of 1968 marked a crisis for the Biennale; the Grand Prizes were abandoned and more emphasis went to thematic exhibitions instead of monographic ones. In 1972, for the first time the Biennale adopted a theme: 'work and behaviour'. The 1974 edition was entirely dedicated to Chile, as a major cultural protest against the dictatorship of Augusto Pinochet.

And today? For 2013 the Italian curator Massimiliano Gioni chose the theme "Il Palazzo Enciclopedico / The Encyclopedic Palace" named after a project by artist Marino Auriti that imagined - with an actual scale model - a museum called The Encyclopedic Palace of the World meant to house all the world's knowledge. His model is displayed at this year's Biennale. It's a curious idea which spawned a number of interesting-sounding discussions at the Biennale on subjects such as "can you know it all?" and "is all art, Art?" and such-like. I was sorry that I couldn't catch them (though they were probably in Italian).

The National Pavilions are interesting. There are 29 permanent country pavilions in the Giardini, and countries who don't have one there exhibit in other venues all around Venice. You might be walking along a canal somewhere and - oh! there's the Kenyan exhibit, or the New Zealand contribution...There's no single format for who and how the country pavilions are maintained - each country decides whether a government department will oversee it (such as the British Council for the UK pavilion) or out-source to (such as the USA's which is run by the Peggy Guggenheim Foundation.)

Wiki has a full list of participating countries, and artists who have exhibited for them over the years.

And yes, Australia has a pavilion in the Giardini:

The Australian Pavilion, designed by Philip Cox to be a temporary structure, was opened in 1988. Cox and other generous donors gifted this pavilion to the Commonwealth Government. A new pavilion is to be designed by architectural practice Denton Corker Marshall and due to be completed in 2015. Australia's participation at the Venice Biennale is managed by the Australia Council for the Arts. However, all of the A$6m ($6.04m) needed for the new building is to be raised from the private sector.
(source)

Australian artists who have been exhibited there since 1954 include Sidney Nolan, Russell Drysdale, William Dobell, Arthur Streeton, Arthur Boyd (a few 'non-contemporary' artists there); Bill Henson in 1995 (interesting! he manages to be highly controversial still); and in 2013 Simryn Gill.

The Biennale has an attendance today of over 300,000 visitors - including me. I'll have more to tell you about some of the exhibits that caught my eye, and what I thought of them, in later posts.


Posted by Annette Freeman at 1:13 PM