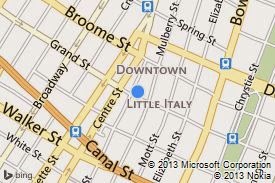 On a recent visit to New York City for four days, I ate nothing but Italian. Granted, I was visiting with an actual Italian, but still...New York City has many neighbourhoods, and "Little Italy" has been established for a century. It even has its own website.
Geographically, it centres around Mott and Mulberry Streets, St Patrick's Old Cathedral (at 263 Mulberry), and a cluster of restaurants, delis and cafés all channeling the Old Country.

Let me take you on a tour of the Little Italy sites I sampled...
Join me for dinner at Emilio's Ballato restaurant at 55 E Houston St. Emilio is from the Amalfi Coast. As such, he is careful about his food, careful about his guests (no reservations, BTW) and if you're an Italian from the Amalfi Coast you get to invade his kitchen to give instructions about your dinner. This reviewer complains that "Ballato’s clubbiness can seem off-putting, especially as owner Emilio Vitolo scrutinizes newcomers from his front corner table" but is won over in the end:


Vitolo favors unfussy preparations of classic dishes. Almost all are winners. Hearty rigatoni alla Bolognese comes in a thick sauce with beef, veal, and pork, while baked shrimp benefits from pristine seafood and simple garlic and bread crumbs. An extensive and reasonable wine list includes Ballato’s own label, produced by a Tuscan friend. A private dining space in back has hosted celebs like Billy Joel, Lenny Kravitz, and Tom Hanks, while a central-casting mix of outer-borough Italians, younger locals, and wide-eyed tourists people the spare main dining room. The club vibe pervades, but doesn’t exclude: If Vitolo doesn’t know your name when you’re seated, he will by the time you’ve finished your espresso and nibbled on a plate of on-the-house biscotti.

For your deli requirements - gorgeous imports from Italy - the motherlode is at Di Palo's, 200 Grand Street. Lou is one of the brothers running the place, and his son Sam is in charge of the wine enoteca (all Italian wine, of course). Various other daughters, wives, brothers, sisters-in-law, aunts and uncles assist: heirs to a business that's been in the family for several generations. Lou and Sam have visited the Amalfi Coast, and source some of their products and wines from the region. 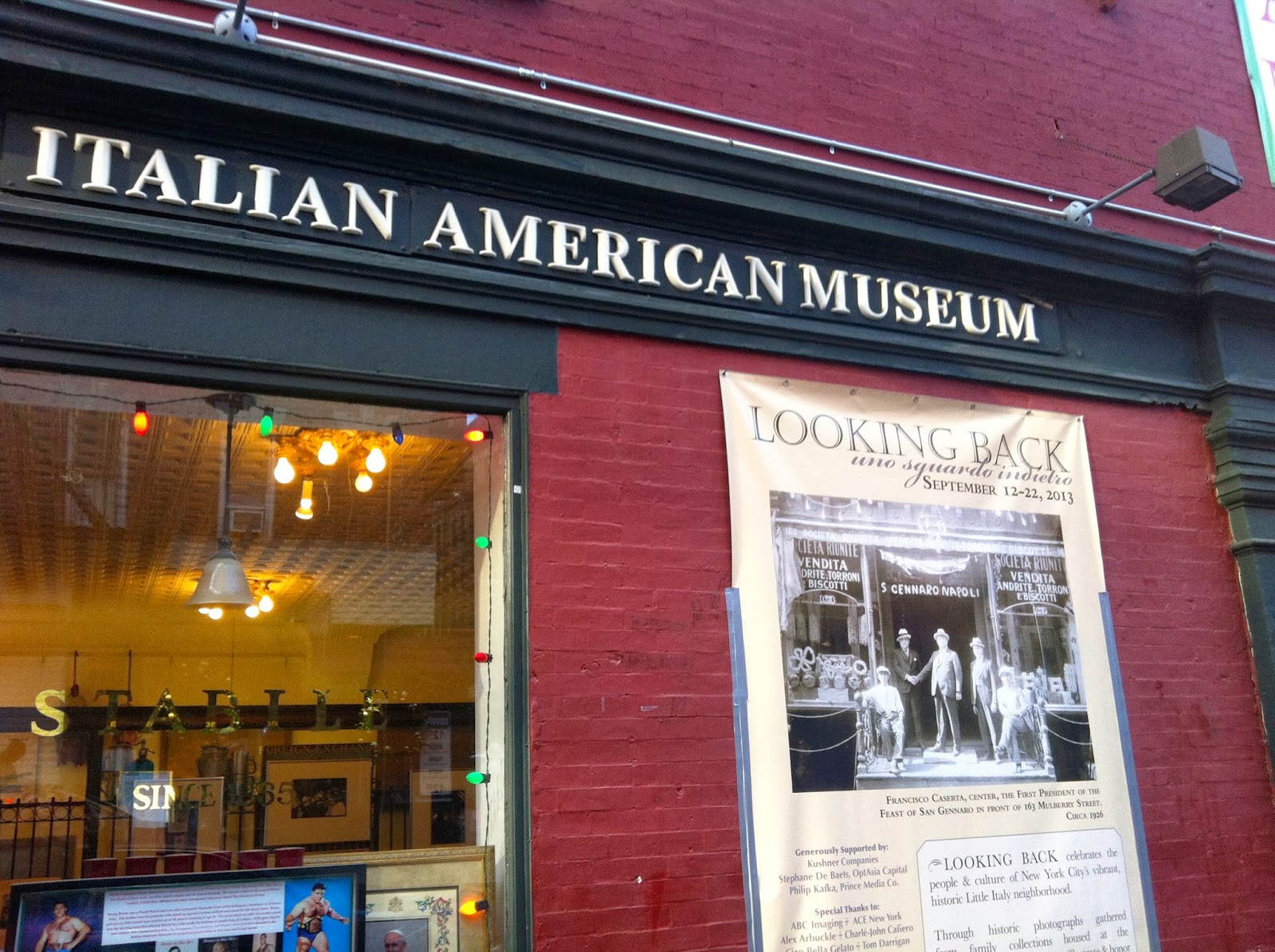 On the corner of Mulberry and Grand is a small, slightly amateurish but very sincere small museum, the Italian American Museum. What better location? This historic location on the corner of Mulberry and Grand Streets once housed “Banca Stabile” which was founded by Francesco Rosario Stabile in 1885. During its heyday, the bank offered the newly arrived immigrants from Italy much more than financial services. It was a link for the Immigrants in the United States with their relatives in Italy. In addition to a full range of banking services, it also provided the following services: telegraph, travel via steam ships, import-export, notary public, and post office; a kind of all in one immigrant community service centre. (source: their website).

The Italian American Museum goes to explain (on it's website) that it "is more than an immigration museum. Its purpose is to document the myriad of contributions made by the people of Italy and their descendants to the very fabric of American society from its earliest origins and its philosophical underpinning through philosophers, explorers, adventurers, industrialists, scientists, educators, politicians, and everyday extraordinary people, telling the whole story which continues to flourish and evolve in America today. Italian Americans are the fifth largest ethnic group in the United States of America today, with distinct cultural values and traits which distinguish them as a people within the greater multicultural American society. Thus, the museum serves as a point of reference for those who are Italian Americans and those who wish to learn about Italian Americans."

The Library of Congress tells part of the story here:


Most of this generation of Italian immigrants took their first steps on U.S. soil in a place that has now become a legend—Ellis Island. In the 1880s, they numbered 300,000; in the 1890s, 600,000; in the decade after that, more than two million. By 1920, when immigration began to taper off, more than 4 million Italians had come to the United States, and represented more than 10 percent of the nation’s foreign-born population.

What brought about this dramatic surge in immigration? The causes are complex, and each hopeful individual or family no doubt had a unique story. By the late 19th century, the peninsula of Italy had finally been brought under one flag, but the land and the people were by no means unified. Decades of internal strife had left a legacy of violence, social chaos, and widespread poverty. The peasants in the primarily poor, mostly rural south of Italy and on the island of Sicily had little hope of improving their lot. Diseases and natural disasters swept through the new nation, but its fledgling government was in no condition to bring aid to the people. As transatlantic transportation became more affordable, and as word of American prosperity came via returning immigrants and U.S. recruiters, Italians found it increasingly difficult to resist the call of “L’America”. 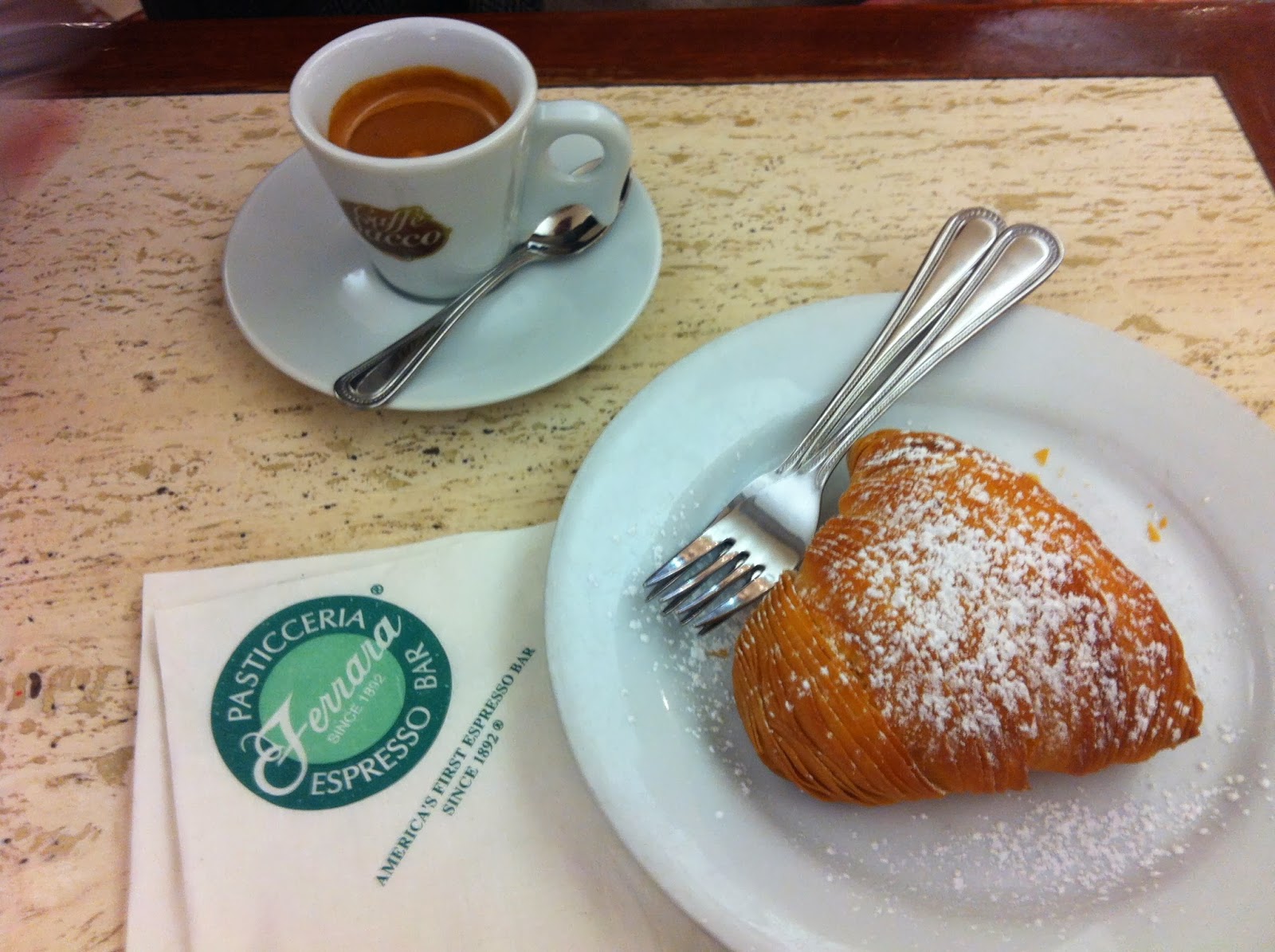 And finally, let's stop for an espresso and sfogliatella at Ferrara Bakery and Café, 195 Grand Street
between Mulberry & Mott St. As they exclaim on their website:

For four generations, the Ferrara family has been delighting Little Italy with its outstanding Italian/French desserts. Cannoli, sfogliatella, gelati and more have been made right here since 1892.
Today, not only can you come in and enjoy the "Ferrara Favorites" along with specialty coffees, lattes and espressos, you can now order for delivery anywhere in the continental USA for a taste of Little Italy at home!

I can report that both the espresso and the sfogliatella were, indeed, like a taste of home.

Posted by Annette Freeman at 8:57 AM