Swimming with the Sharks


It was a balmy May day in Sydney, the sun was warm and the sea sparkling. But lurking in the sea was a school of....de-de-de-de-de...that dreaded denizen of the deep....yep, SHARKS. So who would choose this time and place to don a wetsuit and SCUBA tank and go diving with the sharks? Especially as it was FEEDING TIME!

That intrepid Man of the Deep, Dan - that's who. Now, let me just clarify. This dive was to take place not in the open waters of Sydney Harbour - even Dan wouldn't go looking for sharks out there - but in the confines of the Manly Aquarium, and under the supervision of expert shark feeders. Yes, it was feeding time at the Aquarium, and there were several varieties of sharks gliding around in the murky water of the tanks: Grey Nurses, and Port Jacksons, and the weird and wonderful Wobbegongs. Plus several impressive sting rays, as large as double-bed blankets, and about as intelligent. (Yes, it was one of those that did for poor Steve Irwin).


Now, this would not be my idea of a fun way to spend a sunny Friday morning, but Dan is made of sterner stuff. I and the other breathless spectators were able to watch the whole thing from the perspex tunnels that run through the Aquarium, gasping and ooh-ing and ahh-ing as Dan made his first - yes, folks, his first - dive, into a tank of hungry sharks.

At least, we assumed they were hungry, since it was feeding time. But when it came down to it, the Grey Nurse sharks were decidedly comatose. Despite dead fish being dangled in front of them by the diving feeders, few wanted to actually snack. Instead, they lolled away lazily, looking architypally fearsome but acting like a bunch of bored bunnies. The Port Jacksons were more lively, rummaging around in the feeders' buckets like puppies. The Wobbegong - ah, he (or possibly she) was more impressive, waiting quietly until a dead fish was dangled behind it's head, then snapping at it impressively.


The Aquarium divers and guides seemed to love their shark buddies. As one guide repeatedly pointed out, more people die every year from falling coconuts than from shark attacks, which is a thought-provoking, if random, statistic.

Dan emerged from the shark tank, casually brushing off a Port Jackson or two and ducking under a massive stingray, proclaiming the Ocean Depths to be his spiritual home. 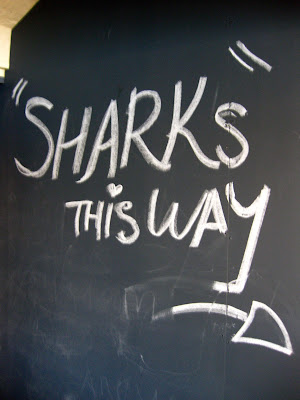 Posted by Annette Freeman at 11:03 PM