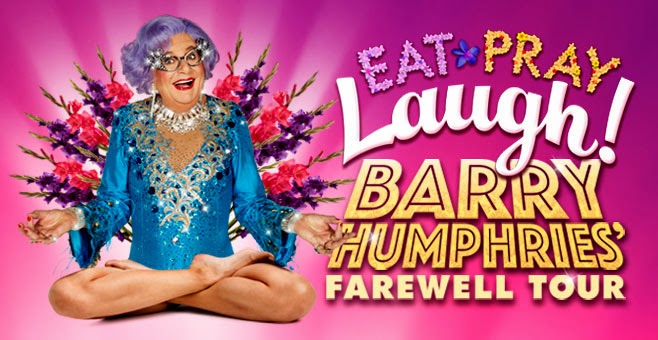 It was a privilege to catch a session of Barry Humphries' 'Farewell Tour' of the UK (I think it's already toured in the antipodes). Dame Edna, who's been around since the mid-1950's will be missed. The show filled the London Palladium, a big old theatre dating from 1910, and the audience were in stitches. This could have been because of the thoroughly non-PC jokes, or it could have been because the English find Australians ridiculous. In any event, a great night was had by all.

We were regaled in the first half by the gross Sir Les Patterson, who managed to enquire if there was anyone left in Poland? "It must be the Marie Celeste of Europe." The farting and toilet jokes wore a little thin after an hour or so; but before Edna joined us for the second half, we segued into a wonderful Humphries character named Sandy Stone.

The Guardian reviewer, like me, is very fond of the character Sandy Stone:


"But my favourite Humphries creation is Sandy Stone, a suburban oldster who reminisces about a contented, if unfulfilled, life from beyond the grave. "Since my cremation," Sandy announces, whistling through his false teeth, "I've kept a pretty low profile." But Humphries is at his best when Sandy talks of the treatment inflicted on his wife as a "care recipient". There is a Swiftian anger in Humphries' account of the way the strict job demarcation of the "wellness team" prevents them helping an old woman writhing on the floor in agony. Even the way Sandy's wife is taught to reply to the simplest question with "fantastic" when she means "yes" is an index of society's casual disrespect for senior citizens." 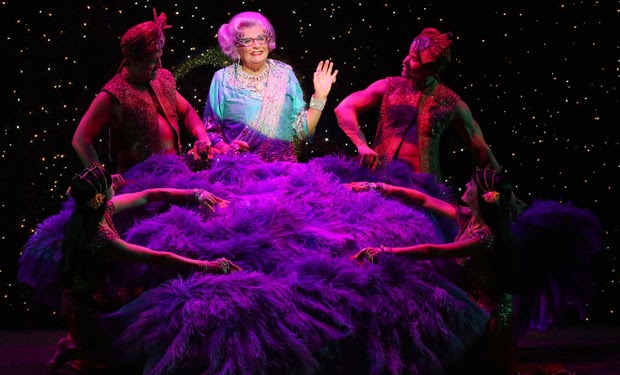 Edna then does her thing, involving those foolish enough to take seats in the front rows. Her material is well worn, but still produces many laughs. The show ended with the touching appearance of Barry Humphries himself, having shed all his characters (excepting only Edna's fingernail polish), to bid us adieu. He ended with an anecdote from his earliest days in theatre, when he'd been mis-cast as a Shakespearean Lothario in tights. "Why do they always laugh when I go on?" he asked his director. "It's not the tights," the director answered. "You're just naturally ridiculous." So true. 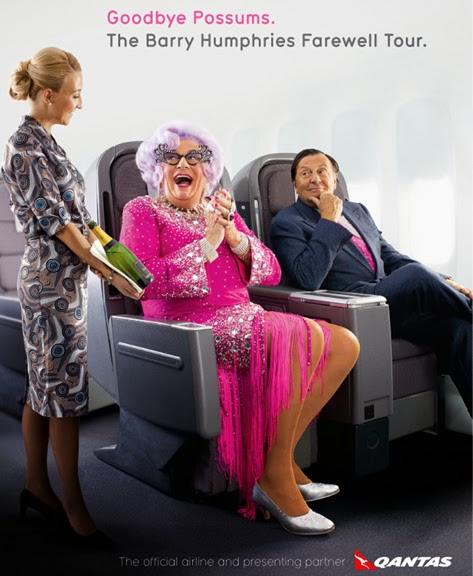 Posted by Annette Freeman at 3:42 PM