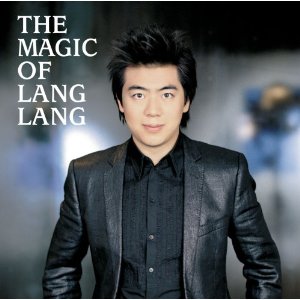 When in Sydney, visit the Sydney opera House. If there is no opera playing, a symphony orchestra concert is the next best thing; and on my recent visit to Sydney the SSO was playing with Chinese pianist Lang Lang. Following my own rule, and also my concert-going companion’s suggestion, I found myself ensconced in an excellent if expensive seat, ready to find out what this phenomenon was all about.


Lang Lang - Google his name, or check Wikipedia - is only 29 years old but has been performing since he was five years old. Due perhaps to his youth, flamboyant performance style and a dramatic story (as much as to his playing talent) he has become something of a world-wide “sensation”. The USA in particular seems to love him. he has played big open air concerts, the Grammy Awards, television shows, Carnegie Hall and the White House.

Then there’s the other point of view, such as that of my classical-pianist friend (something of a child prodigy herself, and certainly an world-class performer) who not only said that she found his playing “flat” but also went so far as to refer to him as “Bang Clang”.


Just to add further piquancy to the story, my concert-going companion had recently read Lang Lang’s ghost-written biography “Journey of a Thousand Miles” (also available in a children’s version, “Playing with Flying Keys” - LL’s management team is nothing if not good at brand-extension marketing). It seems that his story has some very sad moments, mostly to do with a pushy father and a training regime in his childhood that seemed to verge on child abuse.


The concert was of Russian music, all well-known. It opened with the SSO playing Tchaikovsky’s Symphony No.4 in F Minor, well played and enjoyable - conducted by Jahja Ling, the Indonesian-born musical director of the San Diego Symphony. 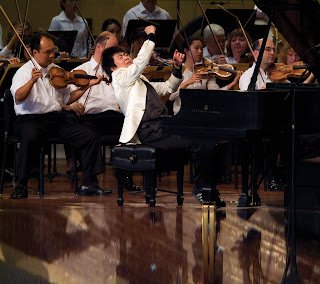 After the interval the young Chinese pianist took centre stage on the Steinway for Rachmaninoff’s Piano Concerto No.2 in C Minor. This is lovely music and the concert was enjoyable. Lang Lang’s trade mark exaggerated arm movements and hand gestures were only a minor distraction. He didn’t, as far as I noticed, “bang” or “clang”. Indeed, I found his rendition rather sad. Perhaps it was because I had been listening to the story of his tough childhood. He played the Rachmaninoff, and his brief encore (which I think was  Liszt's Consolation No 3) as if he had played them a million times before, which is possibly not far from the truth. Fire and Passion? Originality? A performance which will stay with you a a highlight of your concert-going experience? If you wanted more than a good looking young Chinese man playing technically well and with some stage presence, you had come to the wrong concert.

Here  is a review: not bad, quite good, not thrilling. A bit like my reaction.

Posted by Annette Freeman at 5:34 PM