Visiting London, so theatre, opera, galleries are a must. The British capital is an overwhelming cornucopia for an arts lover. Here's the round up from a recent week:

Who wouldn't want to see the lovely Felicity Kendall on stage? And she surely do not disappoint in the clever comedy from the 1960s. Her co-stars were Jonathan Coy, Kara Tointon and Max Bennett, all excellent. It was directed by Lindsay Posner, and delightfully designed by Peter McKintosh.

While I'm a little wary of 'yet another' Alan Ayckbourne play, this one is very cleverly plotted. Check this link for information and this short synopsis:

Ginny goes to the house of her older lover in order to end a relationship and retrieve some compromising letters. Matters are complicated when her current partner also turns up and meets the wife of the lover, believing her to be Ginny's mother, leading to misunderstanding and confusion.

My visits to Covent Garden have been fewer and more carefully chosen this year, but there was never any doubt that Britten's 'Gloriana' would make the cut. This rarely-performed Britten opera has been staged for his centenary year, and despite some hard-to-please reviewers, I found it gorgeous.

It has a somewhat curious history, having been commissioned to commemorate the coronation of Queen Elizabeth II in 1953. face with this invitation, Britten chose a story of Queen Elizabeth I, in the dying years of her reign - the elderly Queen enarmored of the dashing younger Essex, whose death warrant she eventually has to sign. The exquisite production at ROH places the performance - in Elizabethan costuming - as an amateur drama play in a village hall in 1953 -- with a young Queen Elizabeth II in the audience.

The moment at the end when the young Queen faces the old Queen, though an addition to Britten, is a great moment of theatre.

The Guardian review This reviewer seems rather disappointed - or hard to please? I certainly agree with one of his comments: Brindley Sherratt's Blind Ballad Singer is a superb cameo.

As the reviewer describes it:


...an exercise in post-second world war nostalgia. This opera about the first queen Elizabeth is presented as a historical pageant put on in a municipal hall somewhere in England (Aldeburgh's Jubilee Hall perhaps?) to mark the coronation of Elizabeth II, where it's performed in front of the newly crowned queen herself. Throughout the performance, the trappings of am-dram are ever present: producer, prompter and St John Ambulance man hover in the wings, a local musical teacher conducts the choir; there's some suitably naff dancing, while in the Norwich scene (a pageant within a pageant within an opera as it becomes here) the royal monogram is spelt out in vegetables, as if at a harvest festival. 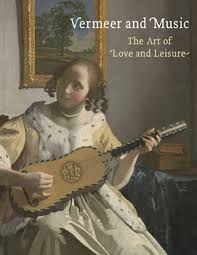 Vermeer: The Art & Love of Leisure - The National Gallery

This blog has already waxed lyrical over Vermeer, and the exhibition at The National Gallery was cleverly curated around the music of the time, with some lovely original musical instruments on display, alongside the paintings. In the Sainsbury Wing.


Put sound to picture as curator Betsy Wieseman explores the fascinating role of music in 17th century Dutch painting and society in this accompaniment to 'Vermeer and Music: The Art of Love and Leisure' which runs from 26 June - 8 September 2013.
'Vermeer and Music: The Art of Love and Leisure' offers an opportunity to enjoy a selection of 17th century Dutch masterpieces alongside period musical instruments, with accompaniment from the Academy of Ancient Music. Featuring five rare works from Johannes Vermeer, including three paintings of women with musical instruments from 1670 - 1672, which forms the culmination of the exhibition and offers a unique opportunity to view these works as a trio. [source]


Lowry and the Painting of Modern Life - Tate Britain 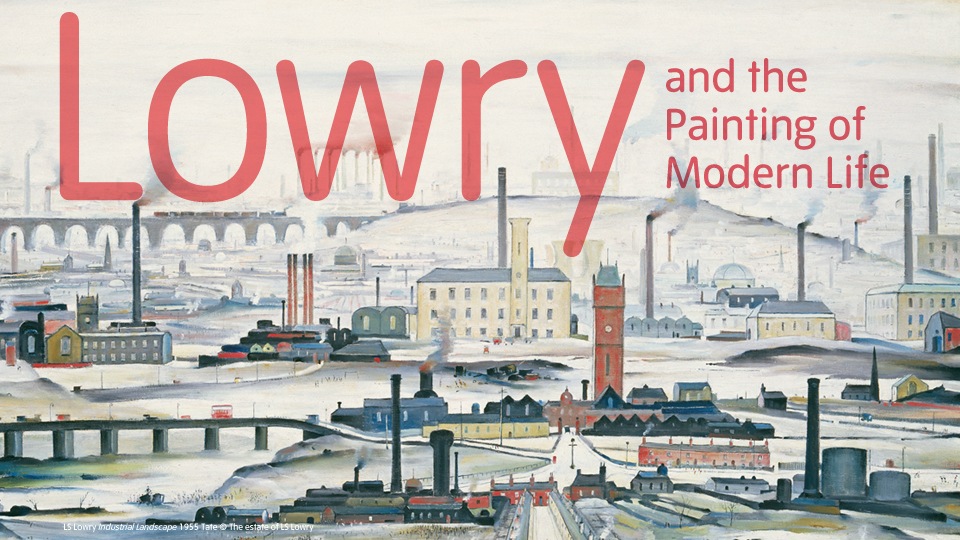 Over at Tate Britain I queued to see a very popular exhibition of a British painter I'd never come across before: L S Lowry (1887 - 1976). His paintings seemed at first to be a version of naive art, but on closer inspection are very much more. For me the most interesting aspect of the exhibition was the incredible documentation of Britain's industrial north in the early twentieth century. Those 'dark satanic mills' you hear mentioned - Lowry lived amongst them (as a tax collector, of all things) and documented them not only with visual accuracy but a deep and moving connection to what he was seeing.

For Lowry modern painting needed to represent the remaining rituals of public life: football matches and protest marches, evictions and fist-fights, workers going to and from the mill. Without his pictures, Britain would arguably lack an account in paint of the experiences of the 20th-century working class. [source]


Life and Death in Pompeii and Herculaneum: British Museum

The special exhibitions at the BM rarely fail to please, and the current one on Pompeii and Herculaneum is proving incredibly popular. Tickets need to be booked days ahead. I was very keen to see this one, as the artefacts would presumably come from my part of Italy -- I have visited the sites of Pompeii and Herculaneum, and the Archeological Museum of Naples. The exhibition and the catalogue were not very forthcoming on exactly where the exhibits usually reside, but apart from a few which 'belong' to theBM itself, they seemed to be from the Naples Museum or from something called the
La Soprintendenza Speciale per i Beni Archeologici di Napoli e Pompei. All I can say is that the Soprintendenza has some real treasures.

Compared to what the Italians manage in the treasure-filled but cash-strapped Archeological Museum of Naples and at the sites themselves, the BM has done it's usual marvellous job of curation. The Exhibition traces the events of the eruption of Vesuvio, but also focusses on what the remains, preserved by volcanic ash, teach about the everyday life of Roman people in AD 79. Brava, BM.


In Spring 2013 the British Museum will present a major exhibition on the Roman cities of Pompeii and Herculaneum, sponsored by Goldman Sachs. This exhibition will be the first ever held on these important cities at the British Museum, and the first such major exhibition in London for almost 40 years. It is the result of close collaboration with the Archaeological Superintendency of Naples and Pompeii, will bring together over 250 fascinating objects, both recent discoveries and celebrated finds from earlier excavations. Many of these objects have never before been seen outside Italy. The exhibition will have a unique focus, looking at the Roman home and the people who lived in these ill-fated cities. [BM press release]


Guardian review of the BM Exhibition.

Each year the Royal Academy holds a 'Summer Exhibition' - everything is for sale. There were some things this year I'd love to hang on my walls, but sadly my selections (two lovely paintings by Academician Anthony Eyton) were somewhere north of the £20,000 mark. Ah, well. It was fun to imagine which I'd choose to take home from the more than 1,000 works displayed.

Now in its 245th year, the Summer Exhibition remains a much anticipated highlight of the arts calendar, serving as a unique window on to all areas of the contemporary art world. It is the world’s largest open-submission exhibition, displaying more than 1,000 works in all styles and media, including painting, printmaking, photography, sculpture, architectural models and film.
All works are fastidiously selected by a panel of celebrated artists and architects from across the disciplines, and it is their task to narrow down more than 10,000 entries to those that go before the public. The majority of the works are also available to buy, offering an unrivalled opportunity to own work by high profile and emerging artists.

On the facade of the Royal Academy building: 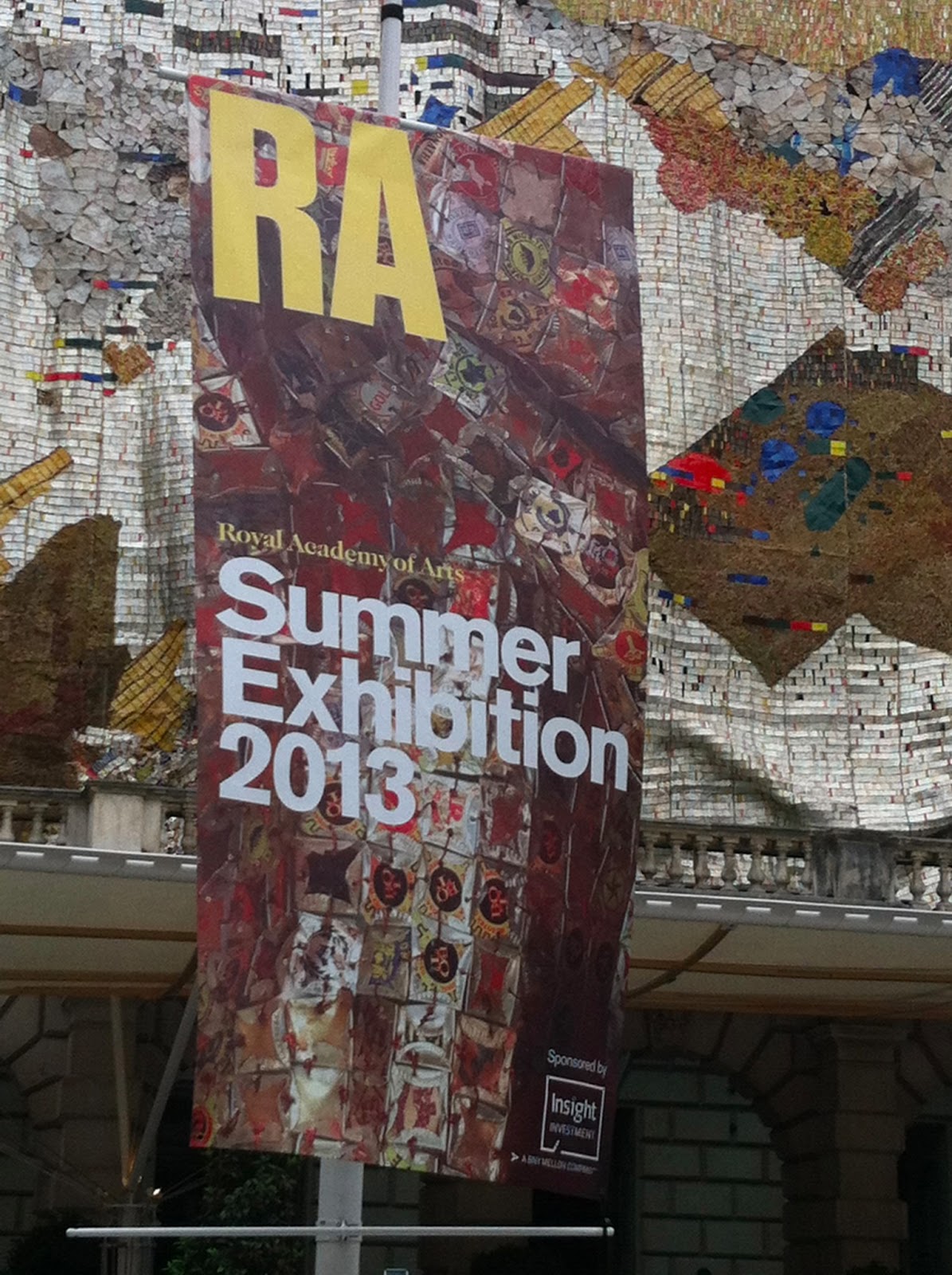 El Anatsui has garnered much international acclaim for a range of spectacular site-based installations. This large-scale bespoke piece, created for the Royal Academy, measures 15m x 23m and is entitled TSIATSIA - searching for connection. It will hang from the balustrade of Burlington House for the duration of the Summer Exhibition. The sculpture is an intricate, shimmering, metallic ‘wall-hanging’ created from aluminium bottle-tops, printing plates and roofing sheets, amongst other materials.


Grayson Perry RA is showing his series of six tapestries entitled The Vanity of Small Differences, telling the story of the rise and demise of Tim Rakewell, inspired by Hogarth’s A Rake’s Progress. See the tapestries on the Victoria Miro website.

Posted by Annette Freeman at 7:28 AM